The record attempt I, Peter Brendan, went for was Wisconsin from E – W. I started at 4:50 AM on June 16th 2018 at the bridge on the WI/MI state line on US 41 over the Menominee River at Marinette, WI. It was slightly damp and was twilight. Marinette was very sleepy as I started my attempt, except for a few sprinklers not much was happening. It was extremely quiet and within 15 minutes I was already seeing Wisconsin farms. I was riding a 2016 Trek Emonda S5. I put on aero bars for this attempt and was using 25s for the wheels to offer a smoother ride since 28s are too big for my bike, and I usually run 23s. The ride was generally flat with some hills until state HWY 64 turned left.

While Wisconsin may not have any mountains (although I biked through Mountain, WI) or any really high peaks, the state makes up for it in its relentless hills. It didn’t flatten out until just outside of Antigo, WI, where the headwind was welcomed if it meant the terroir was flat. I knew that any flat parts would require me to put in a good effort to give myself a time buffer going into the later hours of the day. My plan was to get a lead early so if any issues arose, I would have a buffer to help myself remain calm.

After this point it was more hills and red winged black birds that would be my companions for roughly 100 yards at a time. Unfortunately they were shrilling at me and swooping down at my head from time to time. However I continued on being fueled by energy bars, Gatorade, coca cola, pickle juice, burgers, brats and donuts. I knew that I needed to try to be as calorie neutral as possible if I was going to complete a ride just short of 300 miles. I heard a quote about ultra-runners were many finish 100 mile races through diet alone; this was also going to be my strategy with this ride along with minimal stopping.

I wish I could say this was easy, but it wasn’t. I would have a series of up and downs as I kept riding. My body felt broken and my chamois cream made little difference anymore. I ended up with burns on my butt that were similar to those of rope burn. While my brain would try to convince me to quit, I never gave it much thought.

I decided to pick this ride because I wanted to push myself to my limit of wanting to quit and continue on. I wanted to overcome something that would cause my body is scream ‘stop’ but continue to push on as I knew it would give me a greater appreciation for life and a sense of pride of completing something that most people would give up on. I knew riding Wisconsin from East to West would throw many possible challenges in front of me from body issues, mechanical issues, some encounters with animals and weather that wouldn’t be cooperative (don’t expect a tailwind on this ride). In Japanese culture, there is a concept called ‘Gaman’ which means to endure pain as a matter of character building, this was something this ride encapsulated.

I continued through Northern Wisconsin and went through Amish country. I passed horse drawn buggies and as I streaked past two Amish teenagers working the field with hoes in their hands and straw hats on their heads. Two stopped and stared and audibly said, “Woah, what is that?”

As the sun started setting, my wife yelled to me that if I kept it up we would be done in two hours. However a strong headwind picked up as I started heading south. The wind was roughly 20-30 mph and progress became slow. I screamed into the wind with frustration, this may have been my lowest point, as I felt this record was starting to slip through my fingers. Shortly after my screams of frustration, I could also see thunder storms in the distance. Wisconsin also showed me some of her steepest hills she had in the final 8 miles, but I continued on and eventually reached the WI/MN state line on US 10 bridge over St. Croix River at Prescott, WI. After crossing the bridge, I pulled into Point Douglas Park and collapsed on the grass. This was my high as I knew I didn’t need to take another pedal stroke. It was 12:22 AM, and I was finally finished. 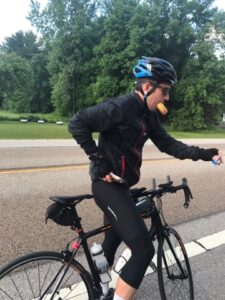 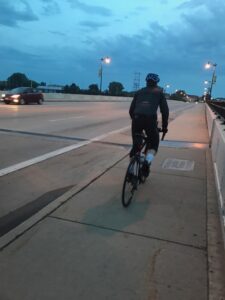 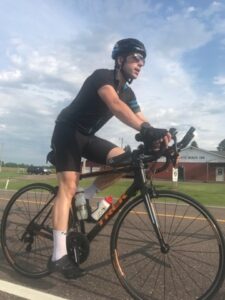 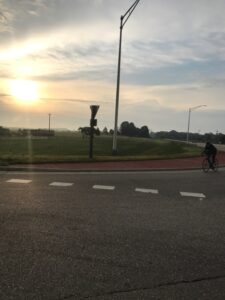 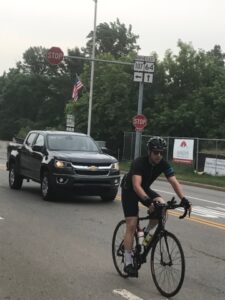 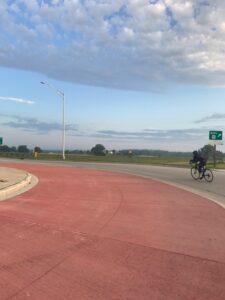 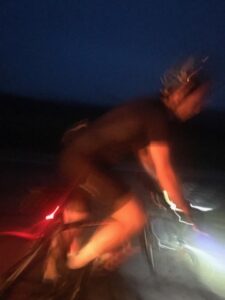 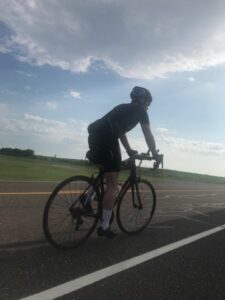 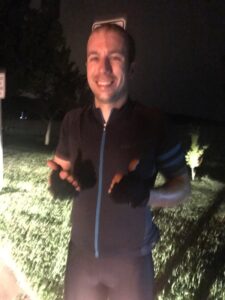