Congratulations to David Meridith for setting the Ohio West to East record in the Grand Master (60-69) Standard category. He finished in 13 hrs 35 minutes for 232.6 miles at an average speed of 16.90 mph.

Here is his story: 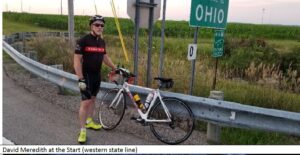 The idea for attempting the Ohio West to East record was hatched shortly after I broke the Ohio North to South record two years ago.  It wasn’t my idea, though!  Michael Johnston, who was my crew chief for that attempt thought it would be a fun thing to do.  He enjoyed the first experience so why not go again?  I am gullible, I guess, and set it up for July 14, 2018.

The reason I chose this date was because our college friends Tom and Marsha Taylor, who now live in Davis, CA,  would be visiting relatives in Youngstown, Ohio and we arranged to meet after the attempt and spend some time together.  As it turned out, this was fortuitous since having them waiting for me at the finish gave me the extra little something to continue the ride when the going got tough.  And it did…

To be completely honest my training prior to this attempt was not at a level that I knew I need it to be in order to break the overall record.  For that to happen I knew I would need a hefty tailwind.  I did, however, believe I could achieve the record for the 60-69 year old age group.

We began the ride on highway 114 on the Indiana/Ohio border at 6:30 AM.  There was no discernible wind blowing.  I wanted to get off to a quick start as I knew that would be necessary if I had any shot at the overall record of 12 hours, 7 minutes.

The start of these things is always tough mentally.  I think about what lies ahead and the effort and pain that I would have to endure for hours ahead.  But, since I had committed to the attempt, and my friends were sacrificing their weekend for me to try this, I knew I had to put those thoughts out of my mind and just ride hard for as long as I could.

The route for this record is pretty much a straight line across Ohio from west to east in the northern half of the state.  The first 150 miles is pretty much pancake flat and I averaged somewhere around 20 miles per hour with eventually a breeze out of the south-southwest around 5 mph.  Not truly a tailwind but we all know it was better than a headwind.
Perhaps I rode to hard for the first 150 miles and burned my matches to early, but when the hills began at that point I had little left in the engine room to ride fast up the hills.

I think of myself as a pretty good climber but there was not much left, it seemed on this day.  I also frequently brag about not being bothered by heat and humidity.  I guess maybe I found my limit on this day though and it appears to be around 94 degrees with high humidity.  It didn’t help that there was very little shade along the route.

Somewhere around the 170 mile mark I pulled off the road at a rare shady place.  I honestly felt like I was in danger of overheating.  Going up hills at such a slow pace allows the heat to radiate off the pavement and I felt like I was riding in an oven.  If my crew had not been so top notch, they would have let me quit.  They wouldn’t let me though.  I expressed that I felt really hot and in a little danger.  They let me know that I looked alright and still looked strong on the bike.  I got in the van for awhile in the air conditioning, they put ice on my neck and gave me cold fluids.  This is when all the thoughts about their sacrifice and my friends being at the end of the ride hit me and I knew I would be finishing the ride.

I got back on the bike and kept pedaling.  The last 50 miles seemed to level a bit and the temperature dropped about 3 degrees and although there was quite a bit of traffic and many traffic signals the ride seemed to get easier.
I knew Tom and Marsha were at the finish and I also knew the last bit of the route was downhill.  Every time I crested a hill I was hoping it was the last.  Finally, the last hill arrived, I came over the top and saw two people on the side of the road who began yelling and jumping up and down and I knew I had finished.
My premonition was correct as I was able to beat the previous age group record, but not the overall.  I finished at 8:05 PM with a time of 13 hours, 35 minutes.
I would like to thank everyone involved in this attempt.  And thanks for the beer, Tom!  I don’t know if this will be my last or not, but I have a sneaky feeling that there may be more in the future.  We will see.