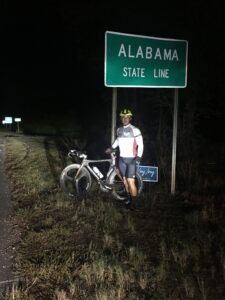 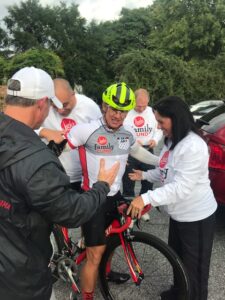 I started at the Mississippi/Alabama line. It was 43 degrees at the start and got to a high of 60 degrees.

I wanted to do a record for the challenge to see if it was possible.

I rode a Specialized Tarmac and Geurciotti Time Trial Bike.

The Best park was not worrying about anything but riding. My crew took care of everything.

The hardest part was crashing on a bottle exchange doing 25 mph at mile 40.

Interesting/unusual things during the attempt: I set PR on Century by doing 4:43 on the first 100 miles. Lost radio communication due to blown fuse at mile 80. The mind really tells you, “You can’t do this, your body is tired”. I kept telling it to “shut-up” not my legs which usually get that speech.

I finished at the Al/Ga line in Pheonix City on the Bridge at 4:15pm

Taylor Kitchens is no stranger to hard work but he was a stranger to competitive cycling until 3 years ago.

He has participated in several charitable, fun events before moving on to more competitive events.  To ensure his success he hired RAAM rider, coach and crew chief and Tracy Mckay and specializes in personal goal setting / endurance cycling.

Taylor needed to build a strong aerobic base and confidence in preparation for senior world championships/ Reno, in 2019.
So, aside from local training races and making the podium in Georgia and Alabama Senior games, his coach encouraged him to challenge what he knows against the ultra world.

To build value and accountability, Taylor would align his efforts with Jack’s Family Fund which provides extended support for his employees in time of need.

On October 27th 2018, Taylor and his support crew stood at the Mississippi-Alabama state line which serves as the start of his 220 mile time trial. Two vehicle with signage and safety lights caring his food and nutrition and full support would follow him through Demopolis, Selma, Montgomery, Tuskegee, and then on to Phoenix city at the Georgia state line.

At 55 years of age and having lost 20 pounds of lean mass, Taylor was ready to hit the road. In the dark the timer dropped. 3,2,1 and off he went.  The follow vehicle would provide moving support feeding him with water bottles and communicating over an intercom. This would be a non-stop event and time was of the essence.

The larger goal of 220 miles was broken down into smaller more manageable miles of  25, 50, 100 145… This allowed for the crew to manage Taylors efforts and project a finish time.

At mile 25 Taylor was 10 minutes ahead of schedule, at mile 40 he had gained another 10 minutes. Then it was time for a water bottle.

The Van pulled aside Taylor at 25 mph.  Taylor reached, His coach reached, and the water bottle made contact. Two seconds later Taylor was sliding across the pavement.  The follow vehicle pulled to a halt.  Taylor was checked out from head to toe, his bike was straightened and with blood pouring from his knee, he was back on his bike with in 30 seconds.  Adrenaline pushing the pace.

45 miles later Taylor would take his first official break for dry clothes, a Wound cleaning and new equipment.  He was now one hour and eight minutes ahead of schedule.

The physical exertion was starting to show, and he took 20 minutes during the scheduled rest stop. The clock was running.

He hit the hills of Tuskegee as planned but the wear and tear of pushing himself so hard was now creeping in to his head.  6 foot six Chris Smith, a manager at Jack’s was on the crew. He would assist Taylor buy holding him up and putting him back on the bike during a personal break. Head down in a faraway look in his eyes, his crew surrounded him with direct encouragement to keep pushing.

With 1 mile to go he gave an enthusiastic whoop and hammered across the 13th st bridge into Columbus ga.

2 weeks off and let the Winter weight routine begin!