Congratulation to Dr Mahendra Mahajan and his Crew for setting a WUCA world record for India N-to-S. They started on Nov 5, 2018 at Kashmir and 10 days, 10 hours and 1 minute later then arrived at Kanyakumari. He covered the 2331 miles at an average speed of 9.32 mph. There were many exciting things along the way. Please read Dr Mahajan’s  pictures he shared with us and his personal day by day account below them. 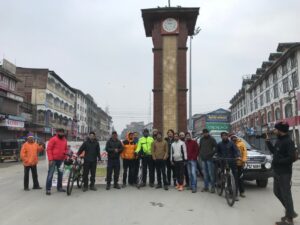 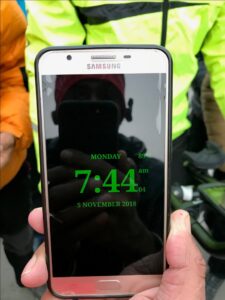 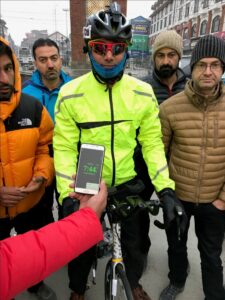 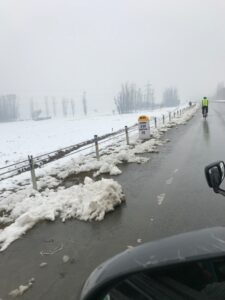 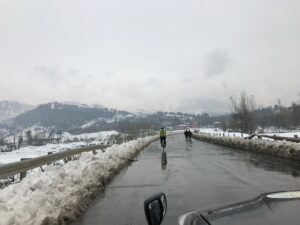 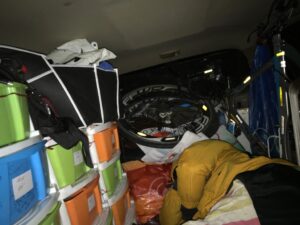 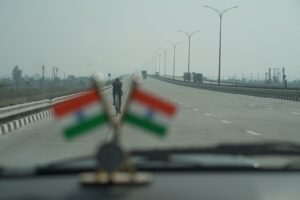 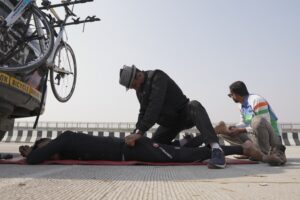 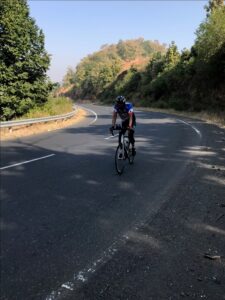 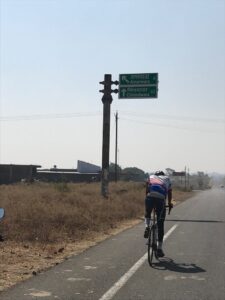 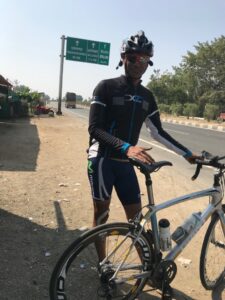 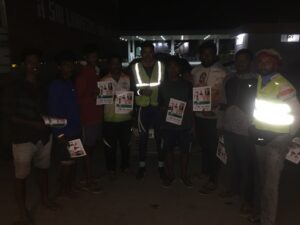 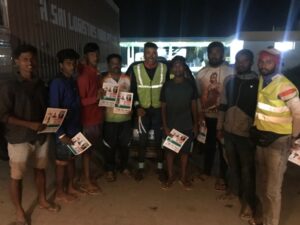 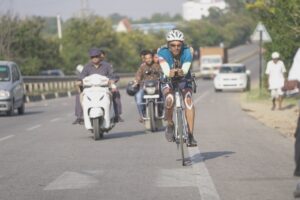 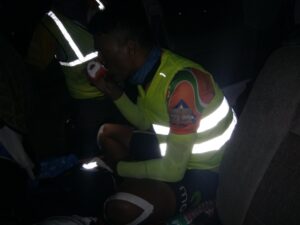 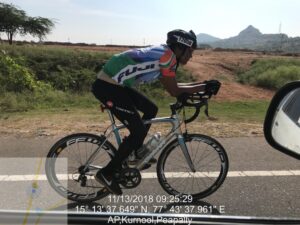 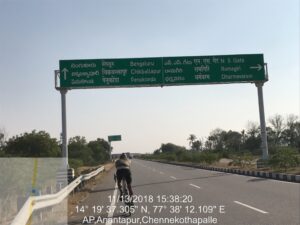 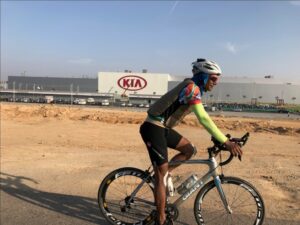 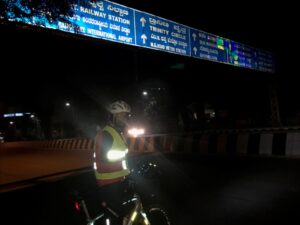 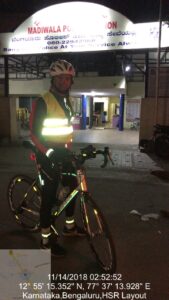 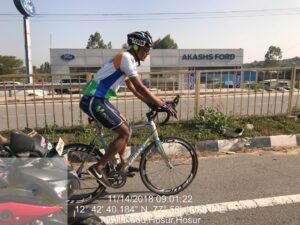 Why I say that…

A brief write up on challenges and overcoming them.

1) Delayed start due to Snowfall in Kashmir Valley :

We intended to start on 3rd morning, but mother nature has some other plans. It rained heavily on 2nd and 3rd and snowed on 4th (first time in 9 years in Nov.) This disrupted the road to Jammu with landslides. So had to start on 5th, although many suggested against it as the snow beside the road was still melting and roads were slippery.

It was biting cold at the start point with 1°C at 6am and 3°C at 7:44 am as we started from Lal Chowk (Clock tower) Srinagar.

Till Anantnag (70km) and later climb to Jawahar tunnel (90km), 3 – 4 feet snow beside road. The road had chilly water from melted snow and breeze was extremely cold. I was wondering if it was a mistake to start the ride, but as I started the clock for record (UMCA and Guinness) had already started ticking. The tip of fingers and toes were painfully cold although had worn gloves with inners and 2 socks with shoes n shoe cover. After tunnel there was no snow but never experienced such strong wind, to an extent that my cycle came to standstill on a downhill and had to uncleat my shoes n step down to avoid fall.

3) Landslide between Banihal and Ramban :

Traffic was halted between these towns with traffic jam for 20 km on either side(40km total)
My follow vehicle got stuck in traffic at 12 pm and i prepared myself to ride unsupported till Udhampur till 8.30pm (where my 2nd vehicle was stationed as i had anticipated this… ) with Patnitop climb to be crossed before that. I rode till the area of landslide where around 200 meters of road was washed away with rubble. This area still had active stone fall and 100s of locals were waiting impatiently pressuring police to leave them as the stone fall paused intermittently for sonetime. I knew i had to carry my bicycle and run on that rubble with cleated shoes on, with crowd pushing me, as no one knew when the stones will run down on us. It was definitely very risky, but I would have lost precious time if i had stopped there.

From Banihal to Udhampur the road is very horrible with potholes, not at all suitable for a road bike. Fortunately no flat tire and no falls.

Had to clean multiple times the slush between fork and front tire, as the friction made it difficult to climb from Ramban to Patnitop.

Finally met my crew and car at Udhampur (the traffic was halted from Udhampur and so they couldn’t drive back to support me). Finally the bike was washed of kilos of mud n slush. Had dinner and continued riding through dense forest and climbs till Samba, joined 4 lane road here and reached Mallikpur, Pathankot at 4:16 am (330km done) , had bath, slept for 2 hrs.

Started riding at 7:53am from Khalsa dhabha, Malikpur, crossed Pathankot, ride to Jalandhar was smooth, crossed Jalandhar at around 1pm and Ludhiana around 3pm. The crowded Ludhiana bypass with traffic jams, flyovers are still under construction slowed down. Dr Pawan Dhingra, very enthusiastic Cyclist got lunch for us. Reached Ambala at around 9.30 pm had a heavy dinner. Around 10.30 i had to take a 2 hrs nap and start again, crossed Karnal at 3am and again 2 hrs nap at Shiv Vaishnav Dhaba, near Barhi village at around 5:30 am. The ride was good except for traffic jams in Ludhiana, covered around 410 Kms.

Started riding at 9:15 am. Took a EPE (Eastern Peripheral Expressway from Rai to Palwal 140 km) – 2 wheelers are not allowed on this, but as it was not formally inaugurated we got to ride on it. Only advantage was Delhi traffic got avoided. 2 disadvantages – It added extra 40 kms and cemented road is extremely hard surface with vibration (not very pleasant to ride, tar road are much better and offer some cushion)

It was a Diwali night and our crew surprised me by burning few…… We also clocked 1000 kms on Mathura bypass and it was a celebration of both.

I started getting the least anticipated KNEE PAIN in both my knees (never had this problem earlier) as we approached Agra. Took a bypass/ring road of Agra, towards Dholpur. Took a sleep break near a Toll plaza due to knee pain at 1:28. Around 310 kms were covered.

As i started the ride in the morning 6:37am the knee was better, but couldn’t push myself hard as it would hurt. Crossed Dholpur, only town in Rajasthan and by 11 am crossed Chambal river and Chambal ghati, later Morena, Banmore and reached Gwalior (MP) by afternoon and were welcomed by Gwalior Cyclists. Thank guys you were amazing. After a snack break and press meet started ride to Jhansi. Now this road is under construction and in sections very bad in Dabra Datia section. Reached Jhansi bypass in late evening. After Babina the knee pain was getting really bad and took a sleep break at a dhaba just before Lalitpur 00:24 hrs. 320 kms were done for the day.

Started riding at 6:17am. I had not taken a painkiller and there was an unbearable pain with each pedal rotation (even at low ratio), took a long breakfast break (1 hr) a painkiller and started riding. The temperature had now started increasing as we approached Sagar(MP), so started using cooling towel n vest and arm sleeves. At Sagar we decided to shift on normal pedals and sports shoes, this along with knee tapes n painkiller were making pain a bit bearable and reducing speed. Crossed Narsinghpur n 15 – 20 km ahead took a break after crossing Jetpur toll naka on Chindwara road at around 12 in the night (300 kms were done) . Parked my fortuner car at extreme left side of the road when a loaded Mahindra Pic up loaded with Tomatoes hit our vehicle from opposite side at may be 80 – 90kmph, this damaged the car to and extent that its totally damaged (irreparable), its still parked at Chindwara Toyota showroom. Apparently the driver of Pick up slept off while driving. Fortunately no one was hurt. Then police was called, FIR was lodged and we called our second vehicle which was 200 km ahead to the site. The entire night was spent sleepless by everyone and later in the morning entire luggage from Fortuner was shifted to second vehicle Ertiga. I started riding at around 7.30 in the morning. Thanks to Hitendra CMahajanMilind Pimprikar, Ravinder Singal sir and Harish Baijal sir for boosting my morale to continue ride. 2 of my crew Dattatraya Chakor and Vijay kale waited at the accident spot and had tough time to shift the vehicle to Chindwara alnost 100 kms away with the crane as the place was remote n inaccessible and due to diwali period services were unavailable.

Day started late at 7:15 with the trauma of accident and sleepless night. There were 2 climbs /ghats on the way to Chindwara. Had to stop for a power nap at around 12 pm once. Afternoon heat, crossed Chindwara in the afternoon and reached Savner by sunset. Crossed from MP to Maharashtra and reached Nagpur, Zero mile landmark (supposedly the centre of India) at around 8.30 pm. Met Nagpur Randonneurs Anirrudh Rairich, Amit Samarthand Dr Ashay Kekatpure, Orthopedician who examined my knee and suggested to continue medicines and renain hydrated. I was atleat assured that i wasnt causing permanent damage to the knee). Thank you nagpur cyclist’s for welcoming us.

We left nagpur, had dinner at the outskirt of city. Post dinner it was not possible for me as well as crew to continue ride (as previous night no one had slept). We checked into a hotel in Butibori at 12 in the night, it was for the first time i was sleeping in hotel and not in support vehicle. Took medicines and slept. Least mileage of 270 km was done.

Started ride at 7:37 am, the knee pain was again becoming untolerrable, took a painkiller, rode slowly, the medicine worked after an hour and then gathered momentum. I couldn’t go off saddle since the time knee trouble started i. e day 3.

A FALL WHICH WASN’T SEVERE : While crossing Hinganghat had a fall (even though not using Cleats) on a speed breaker (big size rumbbler) after flyover. Fortunately escaped unhurt except bruises on palm.

After crossing Pandharkawda afternoon heat increased. So used cooling vest soaked in water, wet towel n arm sleeves. As the sun started setting and the forest after Adilabad the temperature dropped. Crossed Nirnal and continued riding till 1.45 to reach Kamareddy bypass, checked into hotel beside the highway. 350 kms were clocked today.

Now i started taking painkiller an hour prior to starting ride, so that i could start the ride pain free. Started riding at 7:04am, Hyderabad was just 120 km from here. At Medchal, 11.30 am met Nilesh Yadav who advised to take a city route to cross hyderabad as it was afternoon and the idea worked well, we crossed at around 2.30 pm Gandiguda. Outer ring road is a longer route and Cycling isn’t allowed as its a expressway. There is a good downhill in section as you head towards Kurnool, reached Kurnool at around 11.30 pm. At Amakathadu toll plaza had to take a sleep break at around 2:22 am (376 kms were covered today)

Started riding at 7:55 am and reached Anantpur at around 1 pm, had lunch and had to take power nap. It was a hot day, all remedies to fight heat were used. Anantpur to Bangalore though is 200 km took more than expected time as altitude of Anantpur (330 meters) and Bengaluru (880 meters), so all the time you are climbing up. Had to take a power nap near Chikkaballapura. Crossed Devanahalli airport at 9:45pm. As was approaching Bengaluru in the night we decided to cross the city through the heart of city – Hebbal,MG road, Electronic city flyover. It was 3:40 am and it was high time for a sleep break in the vehicle at Bommasanda, before Hosur (336 km done)

A best day to ride with rolling terrain and favourable downhills in sections. Crossed Krishnagiri (10:25), Dharmapuri (1:45 pm), Selam (4:12pm) Karur (7:50 pm), Dindigul (12:30am). I thought of riding non stop with small power nap breaks throughout night. But at 2:50 am realised that it wasnt possible to keep awake and took a sleep break on Dindigul- Madurai bypass (240 km before Kanyakumari). 402 kms were done.

Started ride at 6:30 am. This section is dry, hot and windy. Literally drenched myself and rode. Crossed Tirunelveli 1.15pm, vallioor 3.42pm. There are 100s of wind mills which is a beautiful sight but head wind takes a toll.

Our crew also distributed 3000 handbills with a message of QUIT TOBACCO & KHELO INDIA, as i believe that “HEALTHY CITIZENS CAN ONLY BUILD STRONG NATION”

Its a memorable experience whose memories will be cherished LIFETIME…

Thanks is a small word for my crew Dattatray Chakor, Vijay Kale, Sagar Bondarde (SBFlix) , Sandip Parab and Kabir Rachure and KishorKale. Apart from taking my out most care they maintained the detail log book (every hour entry), witness book.

Thank you Pravin Patil, Giant – Starkenn Bikes for sponsering #Giant#Propel #Advanced 2 bike for the expedition. Its a wonderful bike which cruised me through all terrains smoothly.

My family without whose support i wouldn’t have been able to take up this expedition.

Umer Nabi and all his cycling friends of Srinagar who went out of way to help us, host us and start line presence.

And all those who supported expedition.