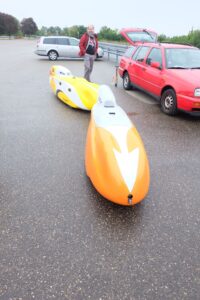 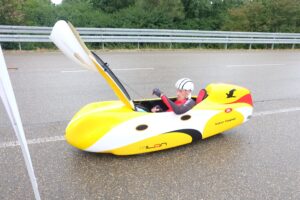 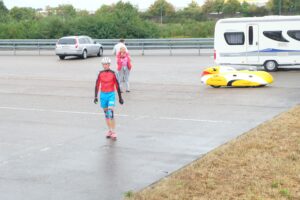 On Saturday, 25th of August 2018, we arrived on the IVECO Test Track for Roland Schell’s attempt at

24h Outdoor Track with the streamlined Milan SL (faired recumbent) – which he planned to use 2 of.

Since 2 of the Crew already were ill with flu-like symptoms preparation took longer than anticipated.

Traffic cones were placed in the banked curves and inspected. A large amount of broken off metal nuts

Weather conditions weren’t great, it started to rain at around 2 p.m. and continued to rain on and off

could be surveyed at all times.

Although the test track has lighting, not all of the lights were working. So both velomobiles were

outfitted with reflective tape and the lighting checked.

At 16:40h Roland started his attempt, 40 min later than anticipated. For the first 2 hours he was on

track for the standing record of 1219 km by Christian Ascheberg acknowledged by WHPVA.

to migrate into the drive train due to the banked curves.

Then he started to complain about a splitting headache – caused by the helmet, or so he thought.

However, after some cushioning was applied he didn’t reach his starting pace but got slower and slower

condition had worsened with dizziness and tremors due to low blood pressure / circulatory problems. 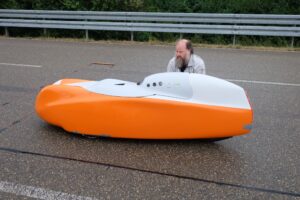 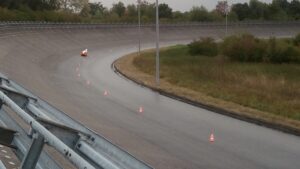 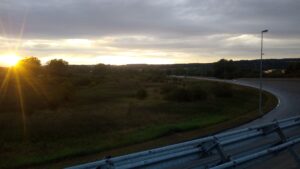 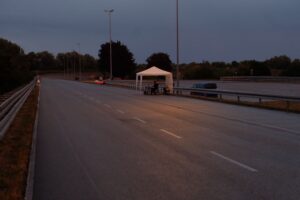 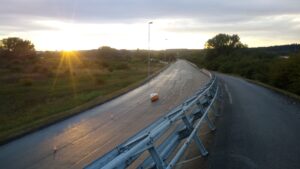 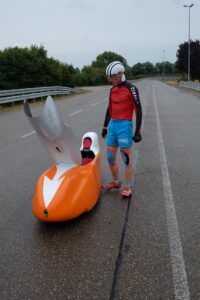