Congratulation to Doug Chivington and his team for setting a new Ohio S-N  record in the following Category:  Solo, Male (60-69), Standard Bike 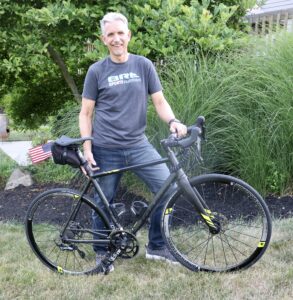 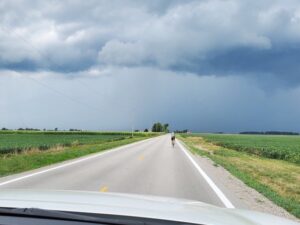 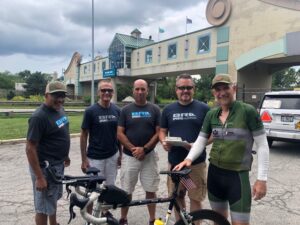 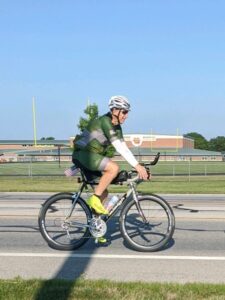 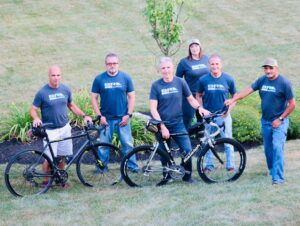 Conditions were good but humid and temperatures reached 94 F in the afternoon.   We had a WSW wind and in the afternoon reached 10-15 MPH.   Experienced a head wind with about 35 miles to go in the early afternoon as a storm was coming off Lake Erie and heading our way.   We did get wet but the worst of it passed through and we avoided any serious safety concerns with visibility.

We left the hotel at 3:00a and started at 3:12a to get a jump on the heat and Cincinnati commuter traffic. We did ride 3 hours in the dark hours of the morning.  Traffic was light through Cincinnati and Dayton area considering the time of day.   The first 50 miles were rolling hills and we climbed 2900 feet.

Starting at mile 50 the rolling hills flatten out, we changed from a road bike to our TT Bike which we enjoyed favorable road conditions with very few miles of chip seal.  The last 25 miles we experienced the highest level of vehicle and truck traffic but this was very manageable with little safety concern.

Our only time challenge was a train two thirds in and it was about a 5-6 minute time delay.   We were off the bike for approximately a total of 35 minutes.

In 2019 we set the record in the 50-59 age group on the same course.  With the Covid-19 virus our race schedule had been adjusted.  I did turn 60 this year so we rode the same route with nearly the same crew to attempt another age group record.  Also, partnered with a nonprofit organization called “Resurrecting Lives Foundation” that focuses on supporting our veterans who still have medical combat conditions after returning home from serving our country.  This event raised over $1000 for our veterans.

I rode two bikes and started with a Jamis Icon Elite with Carbon Wheels (Knight) built by Sugar Wheel Works for our first 50 miles.   Then switched to our aero bike, a Raleigh Professional Steel frame with aero wheels (Vision) and Campy equipped components.

I drank Tri Fuel and water with an occasional Coke thrown in.  Food was oatmeal, Ham Sandwich, Bean and Bacon soup, Payday bars, a few gels and nutrition bars.   Also, to balance my electrolytes a few tubes of base salt.

We arrived safely with little concerns, the crew was experienced and helpful with our nutrition needs as the day was very warm.  We were able to utilize a Wahoo GPS so our friends and family could follow our progress.   We also had the Ohio RAAM Show on the course and several newspapers reporting on our progress.   With the event also being a fund raiser it was nice to see the support for our veterans who continue to struggle with their war injuries.

It was the heat of the day for sure.  It reached 94 degrees F and our heat management strategy and tools were needed.    We had a storm cell roll in the last 35-40 miles or so and that created some head winds that we needed to deal with.

Our follow vehicle had a maintenance issue the day before the event. One of our local car dealers provided a very nice vehicle for the team and in the prep stages of the ride it would not start.  The dealership was already closed for the weekend and the owner of the dealership allowed us to use their vehicle for the record attempt and personally brought it over to us.  Turned out to be an awesome experience.