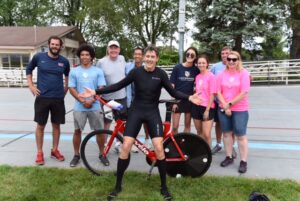 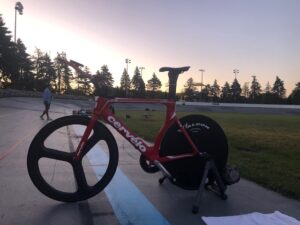 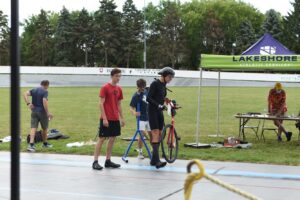 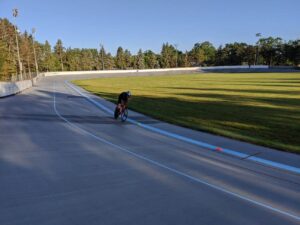 COVID started this. Hung up the Track frame in 2012, but as one race after another was cancelled this spring, I found myself time-trialing more and realized that I had enough endurance to give the outdoor track 100 mile a shot. Dusted off the track bike the second week of April and realized how much I enjoyed the simplicity of fixed gear riding.  Never did an outdoor track attempt, so it seemed novel enough to pursue. Eight years of endurance racing on the Mtb seemed sufficient time to quell my disappointment of not going under 3:45 on the indoor 100-mile and I have found the advancements in aerodynamic positioning intriguing. Wanted to go back to Chicago to see my family and friends, so the Northbrook velodrome was a good fit. The ultimate social distancing event – a solo TT that doesn’t attract much attention.  The NB Velo Assoc had canceled its racing for the rest of the year and I worked directly with the NB Park District to secure the track. Next step was officials – and Byron Gremley graciously accepted the challenge of lead official. He was the master of that in my road-100 back in 2007 and it was a blessing to have him at the helm again. Second in command was my eldest brother Mike, who’s help was invaluable leading up to event, as he lives close to the velodrome and could provide a spare bike. Howard Kambara, a former Oregon Track athlete,rounded out the officials.  So sad that so many athletic events have been canceled due to COVID and the event industry has taken a hug hit. No one knows this better than Tom Cooney, of Lakeshore Athletic Services (Morton Grove), and he was incredibly instrumental in setting up timing support for me – with Catherine, Howard, Chloe, Lily, Jon, and Peter an absolute pleasure to meet and work with.
I feel so fortunate to have so many connections in the Chicago area and willing to join the crew. My sister Bridgette, best man Rich, doctoral mentor Len, nephew Aidan – all crucial to the success of the ride. To top it off, the treat of having my oldest son Tyler in town, on break from Med school, to lead the crew. Even my mom made the trip up to the track – how sweet.

Cervelo T3 with a Falcon rear disc and a HED tri-spoke front. 175 cranks with 56×17. Garmin power pedals. Ideal cadence would have been 98, and I thought my training supported this – but I was wrong – and the mild wind significantly fluctuating my cadence just drove that point home the further into the event I rode. The pipe-dream was a sub-3:50 100-mile, but under 4 hrs seemed reasonable, and I would stay on the bike as a warm down to the 200K mark. By the 30 mile mark it was obvious that a 98 ave cadence wasn’t gonna stick for more than 2.5 hrs and it was fluctuating 4-5 rpm through each lap due to the wind. As any endurance track rider knows, it’s either keep the power steady and vary the cadence OR vise versa – either way you wear down faster than being able to keep both stable. I’m still not convinced that shifting on a road bike would be faster, but I like the forced full circle of a fixed gear. By 50 miles I decided to push to the 100K with a good pace, then ease back for a bit to make sure I did not blow up after the century and not be able to finish the 200K. It felt really good to get off the bike after the 100-mile and I sat longer than I had wanted before getting on the geared bike for a 5-6 mile spin. Then switched back to to the T3, after switching the wheels out to a Zipp rear disc with a spoked front wheel. Perhaps should have changed the front wheel sooner, as it was much easier to hold the line without the sail effect of the HED front aero wheel. Lesson learned – outdoor is a lot different than indoors.  Also, as good as it felt to get off the bike after the 100 mile, I lost at least 13 minutes in the 2 exchanges.  In hindsight, I would have immediately jumped on the geared bike to keep the legs moving and not waste so much time.
Perhaps I’ll spend some more time on the fixed gear and go for some more old-guy marks. Most likely this will depend on whether COVID continues to cause race cancellations and if my loved-ones and I can stay healthy through all of this. My heart goes out to all that are being affected by this pandemic and I hope that we can all find our way through it.
Posted in:  News, Ride Report
This website uses cookies to make the website work properly and to provide services to our members and site visitors. Privacy Policy. OK