Congratulations to Joe Barr who set 3 concurrent records this weekend in the Male 60-69 age-group record a standard bike: 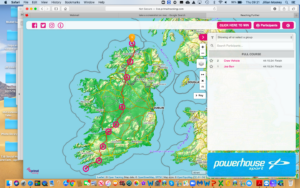 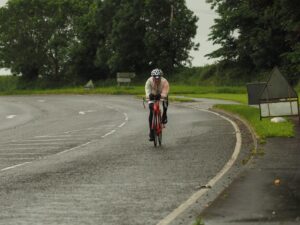 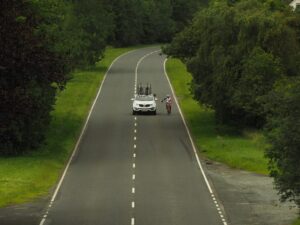 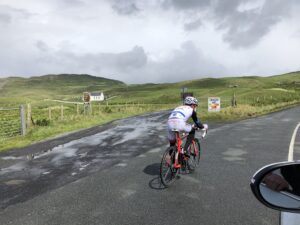 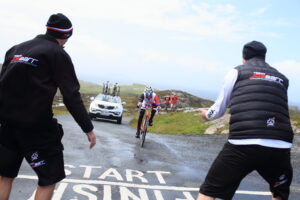 The total route distance, on our chosen route, was 738 miles.

The most northerly point in Ireland, Malin Head is a distinct and iconic location on the Inishowen Penninsula, County Donegal.

Let me put it like this – you stand on a quintessential Irish cliff edge. Black rock, crashing waves and wind await most people. You are lucky indeed if you get sun and calm water.

There is a watchtower built in 1805 during the Napoleonic Wars and a signal station (built in 1902) used by the Marconi Company situated on the Head.

I have started this record 4 times now at this location and the conditions didn’t disappoint – driving rain, 15-20mph wind gusts and a temperature of around 16 degrees.

I started in full winter cycling gear. Welcome to Ireland in July!

Weather is only one part of the start conditions though.

My inner condition was excellent. I was well trained, well rested, well nourished with a rock solid mind-set. I am no stranger to creating a peak performance under pressure.

The condition of my team was similar. After our team meeting we entered that unwavering and steadfast place of ride-crew unit. We were all for one and one for all from start to finish.

It is a course that has captivated me since 2015 when I first broke the standing record.

This particular route brings weather, varied road conditions and types and significant climbing on both ends. It is of a distance and time where it’s possible to ride with no sleep and very few stops. It’s a route that is hard to understand from a rider’s perspective – how the sections flow, what the ‘ask’ is of each section, where to gain time and where to give time.

I felt strongly that it was possible to break the current record (48hrs 38mins) and put the new record under 48 hours. I felt 46 hours was possible in fair conditions.

I rode one bike the complete distance – a Spiegel Diablo built with Campagnolo super record.

Jillian, my partner and performance nutritionist runs my race nutrition.

We aim for a specific hourly calorie intake that is a combination of complex and simple carbohydrate and short to medium chain fats.

We have used the same bottle mix since 2012, BRL Sports Nutrition’s TRIFUEL.

Our solid foods consist of home made bars, home made blended soups (with medium chain triglycerides from coconut milk) and oatmeal.

Oatmeal with honey and cinnamon, sometimes with nut butter, is the most significant complex carbohydrate we use on the bike. Easy to digest and easy to eat on the bike.

We used a GPS tracker for the first time so people could follow the dot and come out on course if they felt inspired.

I was amazed at the hundreds upon hundreds of people that came out to clap as I went past. They came out in the wind and the rain, day and night. It was especially pleasing to see so many parents and kids on course. It was a hugely motivating and humbling experience.

Starting in such wind and rain can be demoralizing. Within 1-2 hours I was soaked wet and I knew that this wouldn’t change for close to 18 hours. Because my body fat is so low I am very susceptible to a debilitating drop in core temperature under wet and windy conditions.

Luckily the outside temperature remained steady at around 16 degrees.

I also had specialized clothing made by Powerhouse Sport, a rubberized exterior that worked like a charm in terms of heat conservation while minimizing condensation.

I have come to understand that extreme weather is just part of this particular course for me.

It was disappointing to have such good weather on the previous weekend but that’s racing, you have to take the rough with the smooth.

Once in a blue moon you get a race where everything aligns to create a peak performance – this was such a race for me.

My mind-set, nutrition, training, preparation all collided in a great way under challenging circumstances. We had to adjust team members and vehicles in the days leading up to the race, which was challenging at the time but turns out created a winning combination.

This was a special performance by all.

Exact finish location so that someone else can find the same spot.

Malin Head – back at the start again. See above.