I like a goal to aim for and after coming third in Sebring 24hr ride with a distance of 402.8 miles in 2017 and being fascinated with Graham Obree and Chris Boardman’s record efforts obviously I’m nowhere near their fantastic standards. I contacted Drew Clarke (Records Chairman) re attempting world records at longer distances. He was extremely helpful and sent me details and people to contact. Drew put me in touch with Jim Parker (Winner of Male US National Century race 2017) and Gerry Eddlemon.  I spoke to both of these Jim’s wife Maria has numerous World Records including the 24 hr World Record on a recumbent bike. Maria and Jim had utilized the roads around Lumberton N.C. which gave me an idea that if other people think Lumberton roads are quick I should use them. Gerry and I teamed up to go for the records at the beginning of October with Gerry being in the 70 + age category and holding numerous World Records. Gerry I was pleased to see set records at the beginning of October in N.C. when I couldn’t make it. We planned to meet again in May so I could help him on the first day and then he would help me the second day.

I qualified and rode for GB in the World Championships road race in France and I was training to do record attempts at the beginning of October 2017. Unfortunately, I was hit by a car on the 31st August 2017 (my wedding anniversary) after coming back from the World Championships and suffered a broken collar bone, broken ribs and broken finger thus stopping my training.

I had entered the World 24 hr championships in California at the beginning of November but my training had stopped for a while for my bones to mend and I only got on my T.T. bike a week before the championship and still had restricted use of my left arm however I did end up 14th overall in my age category.

On return I carried on training and booked a flight to Florida for the end of April for 2 weeks to acclimatize to the heat of the U.S.A and drive to N.C to do the records on the 6th May. Unfortunately, my wife fell ill and couldn’t fly and my mother-in-law Barbara Chandler passed away and the funeral was on the 3rd May so I couldn’t do the Florida flights. I rebooked flights to fly to N.C on the 4th May to return on the 7th May and drove to the airport early on the 4th May unfortunately there was a major accident on the motorway 1 mile from the airport which closed the road for 2 1/2hrs. I missed the flight but caught a flight to Charlotte and waited 3 hrs for a connecting flight to Raleigh then drove 2 hrs to the motel and got to bed at 3 in the morning. When I landed in Charlotte on Friday night I called Gerry and his wife Mikki answered saying he was in Cape Fear Hospital (I kid you not). I said I would call when I landed in Raleigh, I called as agreed and he was still being checked out. We met up the next morning and Gerry was instructed not to ride so could not attempt a record run and I was surprised when he said he would help me the next day. We met up the next day and Gerry’s wife Mikki agreed to help and his two Officials Jim and Mickey stayed on another night to help me. Gerry stated “with all that’s gone wrong up to this point somethings got to go right tomorrow”. I also had Danny and Lesa White course certifiers drive an hour on Sunday morning to meet at the course at 6.30 a.m. to crew for me in the back of their truck their 2 boys were asleep. Everyone who participated with my record attempt was more than happy to help out giving up a large chunk of their time at the weekend.

The next day after I had a few hours sleep I prepped the bike to go for the record the next morning. We started the record attempt at 8 a.m. and based my effort on a predetermined speed which I kept to, the weather conditions were extremely hot as opposed to the cold winter conditions I left in the U.K. After one lap I was ahead of schedule but tried to rein in any surges in power so I didn’t blow and not finish, the wind picked up for the last hour.

During my record attempt I had water with electrolytes tablets to keep myself hydrated due to the heat and humidity and cliff gels and bars to keep my energy and stamina up.

The best bit was the last ½ hr where I pushed more around 24 mph as I felt I was close to the line. I initially applied for all records for up to 6 hours however felt drained after the 100 km and stopped happy that I had achieved at least one Record.

People to thank the Officials and Crew, my wife Susan Horton who couldn’t fly but has been supportive in my attempt and was going to be a crew member as she usually is. Simon Chetwynd (cousin Simon), Ian Wheeler and Jason Bassett who assisted in my training over our bleak U.K. winter. Gareth Pymm a fantastic coach who gave me the training through Matt Bottrill. Stephen Pressick for organising all the paperwork that needs to be done.

Inspirations my Parents Bob and Margaret Horton, James “Turbo” Mason for initiating my first few rides, James Locker, Tom Northover and Jack Corah for listening and advising on bike choice and cycling, Jack Schiavone, Alex Pettett my Maltese cycling colleagues and advisers. Cec Thompson an outstanding athlete who rose from a penniless upbringing in Orphanages to become the first black man to play Rugby League for Great Britain and my A Level Economics teacher. 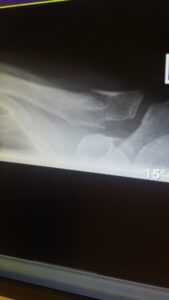 Broken collarbone on the 31st August 2017 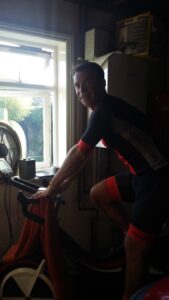 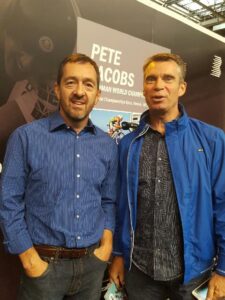 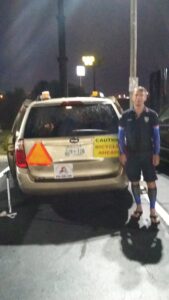 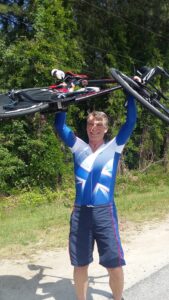 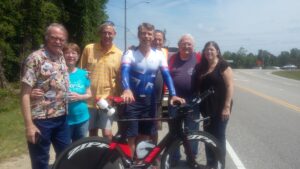