The results have been compiled and standings calculated for the final time in 2016. Announcing the WUCA World Cup of Ultracycling Champions for 2016… Congratulations to everyone who competed across 4 continents, 60 events, distances from 100 to 3049 miles, in multiple age categories on standard, recumbent and tandem bikes and with hpvs. 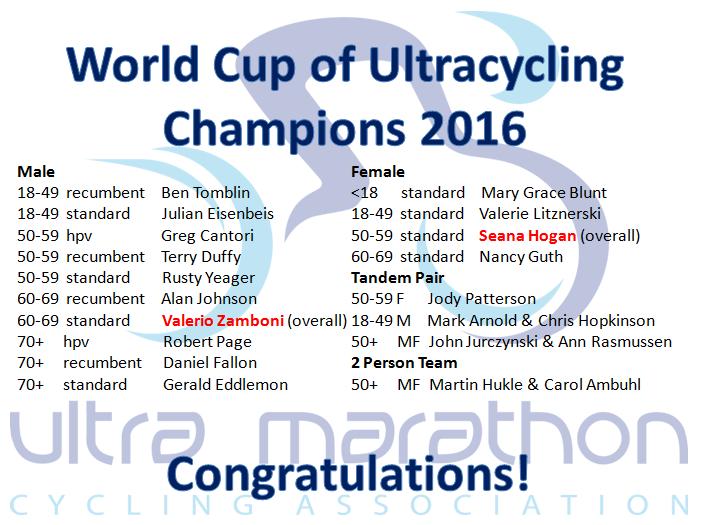 With thanks to the results team, who have spent many hours trawling online results for WUCA members, answering queries and correcting data!

We’re going to make some changes to the format for 2017 to encourage more competition, rewarding average performance across races rather than totalling points. We hope this is going to give members the chance to shine in their favourite races and give those entering shorter races the chance to compete with those finishing the big multi-day events. Watch this space for further announcements.

In addition to our traditional supported races, we have a number of unsupported bike-packing style races on the calendar in 2017. We’ll need a separate category 😉 This should make things interesting!

The calendar is being drawn up currently. If you’re organising a race, it’s not too late to get it included in the World Cup of Ultracycling – just contact the WUCA on calendar@ultracycling.com.

If you’d like to take part next year and compete against Ultracycling legends – be sure to join or renew your membership with the WUCA.