Congratulations to Marc Poland for setting the 60-69 mark for the 100 Km distance in the following category: 60-69 Male, Solo, Standard bike 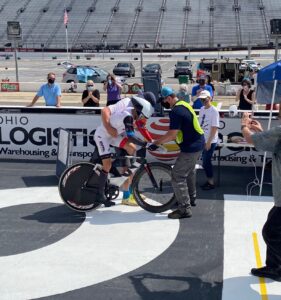 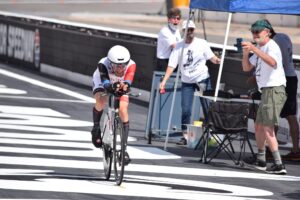 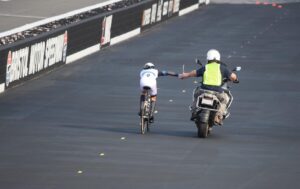 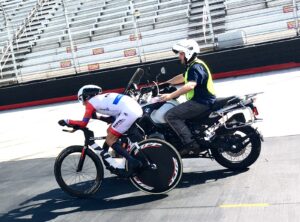 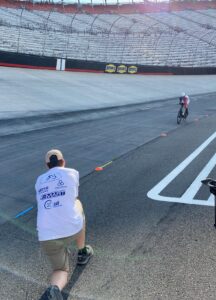 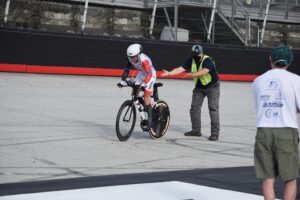 Why did you want to do a record : Like many others, I needed a goal for the season to keep motivation and focus through the spring/summer.  This shorter distance was a chance to move in a different direction than the familiar objective of going ever longer, and to test the boundaries of an older body at the higher intensity that this shorter duration requires.

Equipment : For such a short run, the anticipated speed was so uniform that a single gear made sense, and the decision was reached about a month ago to convert to a fixed gear track set-up. (Cervelo P3, converted to fixed-gear (48×14), with Zipp rear disk and 72mm front spoked wheel)

Eat & drink : A recipe that’s become my standard for all endurance racing and seems to work superbly; a large bowl of White’s Oats early on race morning followed by a steady stream of BRL’s TriFuel throughout the ride.  In this case, close to a gallon of the TriFuel blend of carbohydrates and caffeine in the three hours just before and mostly during the ride.

The best part : Collaborating with a support team through which ten people’s skills and energy could be captured and focused on optimal performance over two and a half hours.  Also, the opportunity to ride on a longer (~1/2 mile, or 780m) car track vs a typical velodrome (250-400m), which meant easier turns and fewer of them.

The hardest part : Stressing over contingency plans for every imaginable scenario, from weather to mechanical issues to illness.  In the end, only one of those plans may have been needed, but there were dozens that had to be thought through and provisioned for.  The one ‘lesson learned’ that was NOT planned for was the huge disparity between GPS-based speed and distance vs that resulting from a surveyor’s measurement of the course.  A 4% variance seems at first minor, but that becomes a full one mph in speed mis-compare, which really threw off pacing strategy.

Anything unusual happen : The arrival of a new record (in the neighboring age category of 50-59) less than one month before the attempt certainly moved the goal posts!  But, on the day of the attempt, everything went quite smoothly, which allowed optimal performance and a reasonably close execution to plan.