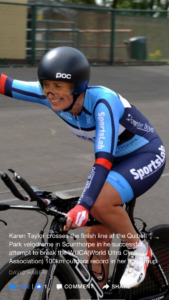 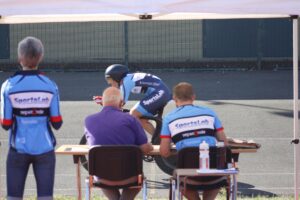 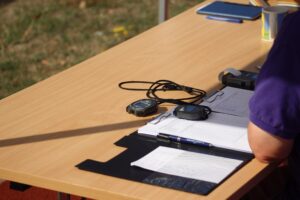 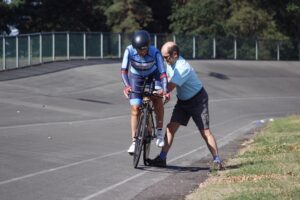 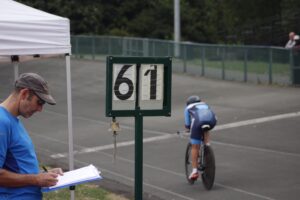 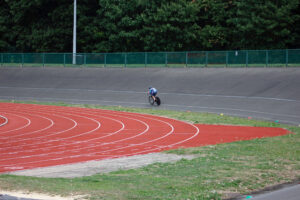 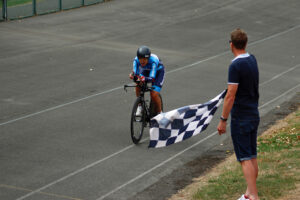 The conditions were warm at 23.3 celsius and as the attempt went on the wind picked up with short gusts hitting me into the bends and along the back straight causing balance issues.

The idea of doing a track record attempt was thought of as I followed President Chris Hopkinson’s successful attempt on same track; Was this something I could do – having never ridden track?

As year progressed I joined UMCA and the idea took hold.  Aged 52 a keen TT cyclist always looking for something different to do, this just really appealed to me – Ive always been good at the longer distances but having been involved in a road traffic accident with car  meant that I have been unable to race 100 mile TT’s recently.

I also wanted to show other athletes with a pacemaker that you can return to sport and to anybody who wants to do something … set your mind … have a go … do it.

The best part of the day was getting to the Velodrome and feeling the tingle of excitement, time going slowly and then 10 minutes to start just whizzing by … and then I was off. Focused on my pacing. Just me and the attempt.  Around half way I had a real ‘ Chariots of Fire moment coming into the bend – I could hear the music and everything … then I had a word with myself and was back on it.

With about 30 laps to go – I wanted to know ‘How many Miles left’ It just became important to me, also that it was windy – I needed let the crew know ‘that was a windy lap – It was gusting on bend’

Oh – and the finish and seeing chequered flag … I didn’t know they got that for me. It was a nice surprise. You sort of think have I finished?

Then it was all smiles and well wishes and congratulations.  Your laps were really even, you were like a metronome.

Then it was back to HQ – quite tense as the timekeepers worked it all out and all the forms were signed.