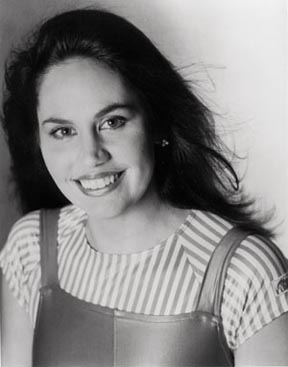 In the old days, March 27 and November 30 held special meaning for Susan Notorangelo.

Besides being birthdays of her husband, Lon Haldeman, and herself, those dates marked the beginning and end of their outdoor bicycle training.

A pioneer in women’s long distance cycling, Notorangelo is honored as a founding member of the Ultracycling Hall of Fame. It was 30 years ago, 1975, when the St. Louis native, got her first cursory exposure to the sport of cycling. Having graduated from the Jewish Hospital School of Nursing that year, the 22-year old struck out in search of life and husband. One stop was Yosemite, CA, where Notorangelo met up with a woman training for a cross-country bike ride. “I thought she was nuts,” Notorangelo said. But she rode with her anyway, waiting at the bottom of the hill while her friend climbed. Those rides were a tiring one-hour in duration.

“I enjoyed it, but I was more into backpacking and cross-country skiing,” Notorangelo said. 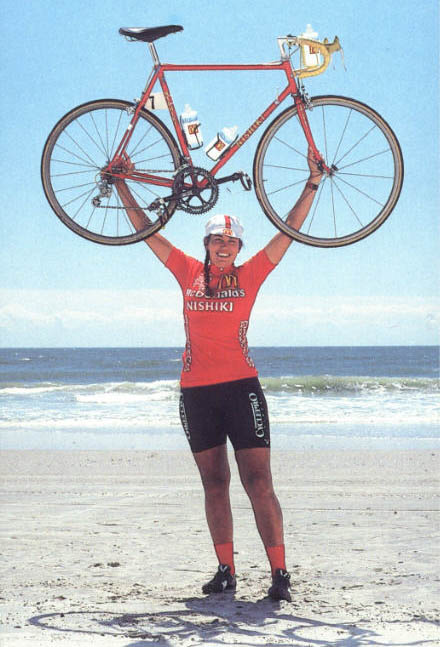 Susan Notorangelo at the finish of RAAM 1985.

Returning home after her disappointing venture, Notorangelo enrolled in the University of Missouri, St. Louis, to pursue an accounting degree. She didn’t have a car, but she did have a bike. And bikes led to bike shops, which led to Sunday bike shop rides. In time Notorangelo would strike up a relationship with “the bike shop guy”. Sunday rides often involved a stopover at a local tavern for a couple beers.

By 1980, Notorangelo’s interest was piqued by an event she learned was going on in her home state. Bicycle Across Missouri was a non-stop 540-mile ride that had to be completed in 72 hours. She sent in her money. They sent it back. She was an unknown. But “bike shop guy” encouraged her onward. “He said he thought I could do it if I trained,” Notorangelo said.

So, after convincing race organizers to take her money, she trained. In June 1980 Notorangelo completed her first century. That was followed by back-to-back 150 milers. Then a 175-mile ride. And, finally a 250. Notorangelo was ready for the September event.

The 26-year-old Notorangelo was the only woman finisher in that year’s Bicycle Across Missouri. She had completed the event with 10 minutes to spare.

Enter Lon Haldeman, also a participant in the Missouri endurance race. (He won the men’s division.) The joke is that Haldeman was done and back in Illinois before Notorangelo was off the bike.

Which may or may not have been true. What was true was that each had made an impression on the other.

Haldeman noticed Notorangelo in a restaurant before the race. “I guess I was first attracted to her because I thought she was cute,” Haldeman said. “I saw her sitting in the Denny’s having breakfast before the Bicycle Across Missouri. She had long black hair and a great smile. I thought it was neat that a woman wanted to ride long distances, so I wrote her a letter asking her about her motivation and training. I was interested in her as an athlete, but it was better that she was cute.” 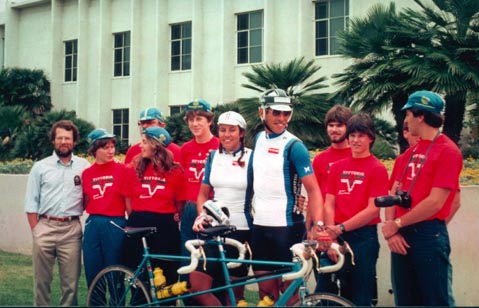 It would take six months from that first sighting for the letter to reach Notorangelo. She promptly took it to show her boyfriend. Haldeman’s letter mentioned that he would be doing a double transcontinental. Being a nurse, Notorangelo knew massage and nutrition, information that would be an asset. She became crew. It was on that crossing that Haldeman said to the woman he would later marry, “You could do this.”

“There is no woman’s record. I’ll help you.” The story goes that she rolled up the vehicle window. But in 1982, after setting a 24-hour women’s record of 401.6 miles, Notorangelo would go on to set the women’s transcontinental record of 11 days, 16 hours.

“Susan pioneered going for long stretches without sleeping that year,” Haldeman said. “She started the record attempt from Los Angeles to New York by riding in daylight. As the days went by we began to calculate she had a chance to break my then-men’s record of 10 days, 23 hours.” Notorangelo started riding more hours into the night. After she reached Athens, Ohio, she rode the last 625 miles almost nonstop in two days. 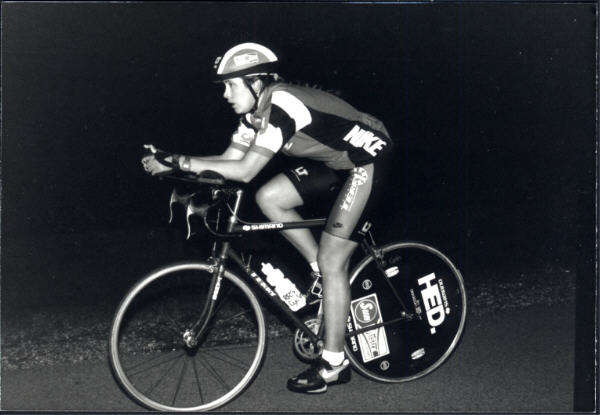 A month later, during the Great American Bike Race, Haldeman tried a similar tactic, riding nonstop the first 600 miles. “People thought I was crazy for going so long without sleep,” Haldeman said. “But I wouldn’t have tried it or thought it was possible if I hadn’t seen Susan do it during her record ride.”

“Once we got to New York City, I believed my long distance cycling goals were being accomplished,” Notorangelo said. A women’s transcontinental record in 1982 and a mixed tandem record in 1983. One more to go–Paris-Brest-Paris.

“Only a few Americans had ever attempted it, and yet Lon felt that I had a good chance to set the (women’s) record,” Notorangelo said. She did with a time of 54 hours, 15 minutes. The record stood until 1995.

In 1984, Notorangelo made her first RAAM run but had difficulty, technically speaking, with an all-women support crew. “When the vehicle broke down, no one could fix it,” Notorangelo said. She abandoned after 1,724 miles.

“Susan is very stubborn about setting a goal and following through with her ideas,” Haldeman said. “She is physically tough and strong. She is very durable and can put up with a lot of pain and discomfort.”

In 1986, she and Haldeman set a mixed tandem 24-hour record of 432.40 miles. They also set a transcontinental tandem record of 9 days, 20 hours. At RAAM that year, she finished second, just 7 hours and 25 minutes off Elaine Mariolle’s pace. “She deserved it,” Notorangelo said of Mariolle’s victory, gracious in defeat as well as victory. Notorangelo was 32 at this point. She had been married three years and was ready for a different challenge. Notorangelo wanted a child.

In 1987 Rebecca Haldeman was born. That year, Pete Penseyres, not Susan, was the stoker on the record-setting tandem transcontinental crossing with Haldeman.

In 1989, with Rebecca two years old, a 36-year old Notorangelo returned to RAAM. As the only woman entered in the event, she needed just to finish to get first. She did better than that. She became the first woman to ride across the United States in less than 10 days. Her 9-day, 9-hour record would stand until Seana Hogan broke it in 1995 with a time of 9 days, 4 hours.

“That was my last RAAM,” Notorangelo said. She and Haldeman would try a tandem crossing in 1994 but fluid retention became a problem for her, and Haldeman insisted they quit in Slapout, OK. 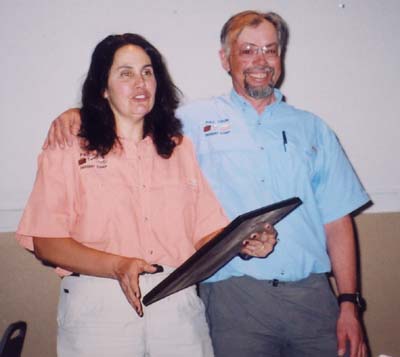 Susan Notorangelo is inducted into the Hall of Fame by John Hughes.

Today, Notorangelo, 51, is enjoying the time left before Rebecca, now 18, goes off for college. She and Haldeman continue to operate PAC Tour, bicycle expeditions in this country and Peru, which has been known to spawn RAAM competitors. Muffy Ritz is one of those. Ritz met Notorangelo on a PAC Tour in 1991 and was duly impressed.

“In Susan I saw an amazingly strong, capable woman who, over the course of three weeks, made me realize that anything is possible if you have the desire. I had the desire, she had the cattle prod. Two years later, I was fighting hard to try to win my first RAAM against a formidable opponent, Seana Hogan. Susan was with me the whole way — sitting on my shoulder — telling me to keep pushing. What an inspiration she was and continues to be, not only to me, but to women cyclists everywhere.”

John Marino, a RAAM founder and race director (1985-1992) has nothing but praise for Notorangelo.

“Susan raised the bar for women’s expectations in ultra-marathon cycling,” Marino said. “Her cycling accomplishments speak volumes for her contributions to the sport. I’ve always felt that the field of women in the beginning days of RAAM was one of quality and not quantity. Susan surely proved that to be true.’

In addition to the business she and Haldeman run, Notorangelo is back in nursing at the local hospital, near her home in Sharon, WI. Because of their sometimes different priorities, Haldeman and Notorangelo don’t get as much time together as she would like, but she appreciates and admires her husband’s passion.

“I’m proud of Lon,” Notorangelo said. “He’s done so much with his cycling.”

The admiration is mutual. “I know my life would not have been as successful, in cycling or in business, if it wasn’t for Susan’s help.”

Though Notorangelo has many cycling achievements to be proud of, her life’s jewel is her daughter. “Hands down,” she said. 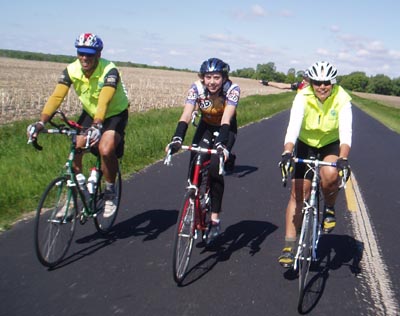 Cycling is now a hobby. “I still ride,” Notorangelo said. But it’s about fitness and friends. “I’m OK about not being as fast as I once was.”

When asked what the future holds, Notorangelo has a dream of retirement and going on what she calls, her “zip code tour”. She plans to visit all people she has met in her cycling years. After all, “the best thing about RAAM and PAC Tour is the people,” Notorangelo said.

Susan is a founding member of the hall-of-fame.