“Ultra cyclists revere the accomplishments of the man who raised the bar to a level that many would strive to reach, but few could attain” 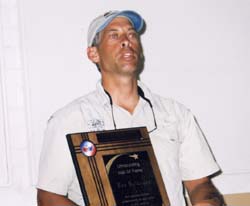 Has it been 20 years already? It seems not too long ago that Lon Haldeman was the catalyst for ultra distance bicycle racing. We remember watching those ABC broadcasts of the early RAAMs and seeing Lon pedal strong and steady, while being interviewed from the open door of a moving van by a “not-believing-what-I’m-seeing”, Jim Lampley.

Lon’s achievements in RAAM had a tremendous impact on the birth of ultra distance cycling. To this day, ultra cyclists of all abilities still revere the accomplishments of the man who raised the bar to a level that many would strive to reach, but few could attain.

In 1979 Lon set the Wisconsin End to End Record going south against the wind. The distance was 407 miles in 23 hours 7 minutes. He used a one speed bike with a 42 x 14 gear (82 inches). Lon rode the first 250 miles without a support crew and then was joined by his parents who followed him at night the remaining miles.

In 1981 Lon set the Double Transcontinental Record of 24d 2h. He first rode from NY to LA in 12 days 16 hours. His goal was to ride 200 miles per day during daylight hours. He averaged about 240 miles per day but did start riding in the evening to avoid some of the headwinds in the western states. On the return trip as he slowed down he started riding at night.

The first Race Across America was called The Great American Bike Race. Lon, and three other cycling pioneers, John Howard, John Marino and Michael Shermer, set off on an adventure that would captivate cyclists’ imaginations and cultivate a culture of long distance cyclists. The men who helped to break ultra ground hold Lon in the highest esteem.

“Lon is, pure and simple, ‘The Man’. In the beginning days of RAAM, Lon set the standard of what it meant to be an ultra-marathon cyclist and a RAAM rider. Lon’s stoicism and dedication in training were inspirational to me. He is a man of his word, consistent, rock solid, steady” – Michael Shermer.

“Lon’s performance in the first coast to coast bicycle race was a major springboard to the sport of ultra-marathon cycling. He captured the respect of key individuals at ABC Sports, which helped promote our sport and inspire many cyclists to get involved in the important growing years of our organization. Setting a sub-10 day world record in that inaugural event provided ‘awe’ to the water cooler conversations. Lon’s humble demeanor and impressive physical presence made him a perfect champion. Lon was always among the most prepared when entering a competition. He was the benchmark for logistics. It seemed we all were aspiring to be like Lon.” – John Marino.

“In retrospect, I view Lon’s victory in that first event as a sign of things to come. Lon was our first hero. He was a pure distance racer, the first of a new breed of American cyclist. He taught this pure bike racer a few lessons on the subject of sleep deprivation that I will never forget.” – John Howard

We might forget that when Lon won the first two bicycle races across America, everything was new. Nobody had ever done this before. Lon’s Transcontinental Tandem Record partner, Pete Penseyres: “Lon was the first winner and introduced a number of innovative ideas into the race strategy. There was no book on how to train or ride the race, so everything Lon did became the foundation of information everyone else studied.

We take many of these things for granted now, but when he rode more than 24 hours the first night in ’82, it was revolutionary. Up to that point, all transcontinental record attempts had been primarily daytime rides with eating and sleeping consuming most of the hours of darkness. For our tandem record attempt in ’87, Lon actually designed the frames that Raleigh built for us. He also designed and built the first aerobars for the stoker position. As a result, we were the first riders to use aerobars on both positions of a tandem.”

A Lon story: One year during Bicycle Across Missouri, his wife Susan Notorangelo was trying to set a record and Lon was riding in support. He ended up far behind with a flat tire. He tried to catch Susan’s crew at the next control, but just missed them. Instead of taking the time to change the tire, he kept on riding. Before it was over, Lon had ridden 50 miles on that flat tire, most of which was out of the saddle to keep from collapsing the wheel.

In an era when many professional cyclists find it hard to make a living in cycling, Lon has found a way to do what many of us would give our left crank arm to do, i.e., cycle to eat. He currently organizes cross-country PAC Tours, Desert Camp and is the race director of RAAM. This livelihood prompts his grandfather to keep asking, “when are you going to get a real job?” Lon (44) lives in Sharon, WI with Susan (one of the great ultra distance cyclists in her own right), his wife of 19 years and their 14-year-old daughter, Rebecca.

“He taught this pure bike racer a few lessons that I will never forget.” – John Howard 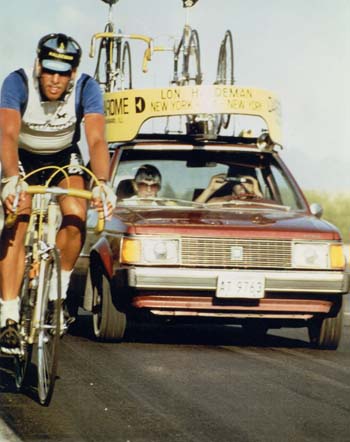 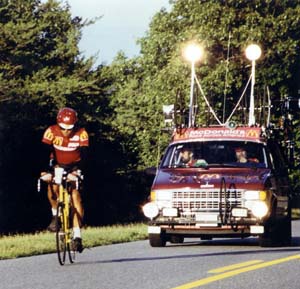 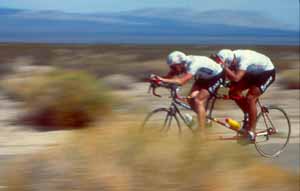 Lon loves to travel; in fact he would like to visit as many third world countries as possible. Lon has developed growing interest in Peru in particular. Last fall he organized a tour through Peru that crossed the Andes mountain range, including a peak of 16,000 feet, which had never been ridden by bicycle previously.

He still rides a good bit, but nowadays it’s usually on his Rivendell one speed. He rode PBP ’99 on a one-speed! Afterwards, he said his knees were a bit sore, but he didn’t have any saddle sores, since he’d stood for 1/3rd the distance! He doesn’t have any racing plans any more, but if he did, he’d do it on the one speed to see how he’d fare against the solo riders. Knowing Lon, most others would end up finishing behind, no matter how many speeds were on their bikes.

Lon has been across the United States by bicycle more than anyone else, at least 50 times. Because of his years of scouting routes for his tours, he’s knows as the “Roads Scholar.” During his Transcontinental Tandem crossing with Penseyres, the crew would keep Lon awake by giving him the numbers of two roads from anywhere in the country. He would respond with the location where they intersected.

He used his knowledge to develop the current route for RAAM. In developing the route, his primary goal was that the route be safe and interesting for the riders. Peter Lekisch from Team Alaska says: “We had everything. A huge moon in Colorado. Lightening flashing all around like luminaires in New Mexico. Red Rocks. Plains where you could see forever. Beautiful rolling hills. If I had to design a course to show off America, I couldn’t have designed a more beautiful course.”

“If I had to design a course to show off America, I couldn’t have designed a more beautiful course.” – Peter Lekisch 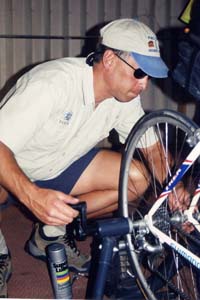 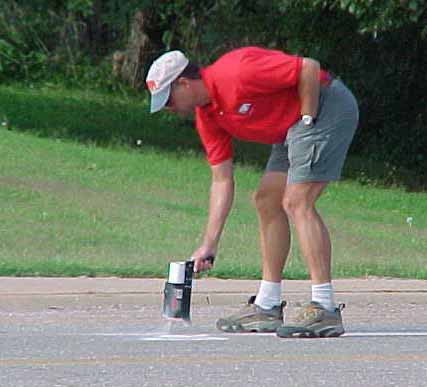 Although not racing currently, Lon continues to influence others. He is at his best when working with a group of riders. During his cross-country PAC Tours, he has helped hundreds of riders realize a dream by cycling across the country. Lon quietly encourages riders to press on into areas of their ability they didn’t realize were possible. Don Norvelle writes; “One year, on the Northern PAC Tour, as I was struggling up a 9 percent grade, I glanced back to see Lon on my wheel. Instead of blowing by me like he could have, he sat there for the entire climb, telling me that I was doing fine, to stay with it and be patient. He showed me that I was capable of much more than I thought. As we became friends over time, Lon encouraged me to try things that I would probably not have done. He has helped me to stretch myself, to exceed my perceived limits, usually without knowing that he has done so.”

“He has helped me to stretch myself, to exceed my perceived limits.” – John Marino

A Lon story: “At one of the early Hellweeks, we were all in a nice group motoring down the road at about 25 mph. Above our chatting I began to hear the strangest sound from behind, that grew louder and louder. It was a cross between a locomotive and a jet engine. I turned to see Lon and Byron Gremley on a tandem absolutely flying past our bunch! The sound was something I’d never heard before. In a second, the rocket was but a speck in the distance. A couple of testosterone-laden he-men took off after them. A few miles down the road we caught the two escapees and they went straight out the back of the group as they were fried to a crackly crunch from the doomed chase.” – Ed Fleming

“Great athletes often become enamored with themselves, growing heads far larger than any hat could cover and forgetting that others are people too. This couldn’t be further from the truth when it comes to Lon. There is truly no better way to describe success in life than words like these: “Lon is always a gentleman. He inspires audiences with his soft-spoken accounts of how he achieved his goals. He never holds anything back. He always has time to answer all questions to the best of his ability. Lon has a passion for cycling and gains great pleasure by watching other people achieve their cycling goals.” – John Marino

“When Lon introduced John Marino at the banquet before the 2000 RAAM, his voice broke. You could tell from the emotion in his voice how deeply he cares about the riders and the race.” – John Hughes

“I was in awe. But, I soon discovered that that he had none of the attitude and arrogance that is often found in outstanding athletes. He was just plain ol’ Lon. He made me feel comfortable whenever I was around him” – Don Norvelle.

Although Lon doesn’t seek accolades, he has reached a certain level of fame, even outside the ultra community. Ron Bell remembers: “On the first day of the 1985 RapidTour [the first PAC Tour], we stopped at a mini-mart for a rest from the 105 degree heat. Lon said, ‘Everybody get something, I’ll pay’. As the clerk rang up the bill, he asked, ‘Where’d you start from? Lon replied, ‘Huntington Beach this morning.’ [100 miles west] ‘Where are you going?’ ‘The Atlantic Ocean’ was Lon’s reply. As we left the store, the clerk said to me ‘Who does he think he is, Lon Haldeman?'” 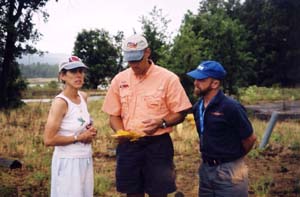 Two Lon stories: “My mom wished us good luck from the pier in Santa Monica at the start of the ’83 race. At the finish, she told me, ‘When I saw the size of his legs at the beginning of the race, I knew there was no way you were going to beat that guy.'” – Michael Shermer. Fitting words for a fitting champion from John Marino: “To me, Lon is the Babe Ruth of RAAM and ultra marathon cycling. Like Ruth, his records have been broken, but the legend will always live on because of the profound impact they had on people they competed against. They’re in a class of their own. Ruth was great for baseball and Haldeman is great for cycling.”