“At the end of your life if people can say you were kind, that is enough.” – Bob Breedlove 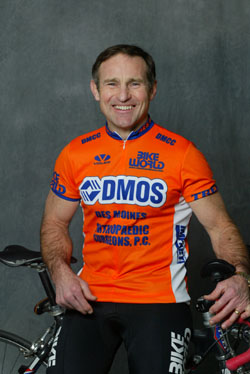 On the morning of Thursday, June 23, the Seattle Post-Intelligencer ran an article entitled “Cyclists Getting Lots of Support during Race Across America.” The article focused on Betty Ackee, who went to visit an orthopedic surgeon in 1989 about her ailing knee. Upon learning that Ackee was into long-distance cycling, the surgeon offered that he “dabbled in that” too. She later learned that this humble surgeon had finished RAAM twice, including third place that year. 16 years later, Ackee was one of a crew of friends returning a favor to that surgeon as he once again “dabbled” in cycling’s toughest race. Ackee spoke of doing whatever she had to do to get her rider to the finish line, and the Post-Intelligencer article described the many difficulties and hazards of RAAM.

Four days and 1100 miles into the race, Dr. Bob Breedlove had cleared Cucharas Pass on Colorado Highway 12. Always concerned about safety, Breedlove was wearing bright clothes and his trademark orange gloves for visibility. On the narrow road, he and his crew agreed that it was safer to use leapfrog support. For no reason apparent to witnesses, police, or the medical examiner, Breedlove reportedly slumped over his handlebars and swerved into the path of an oncoming pickup truck. Skid marks leading off the road supported the driver’s claim that he swerved to avoid Breedlove. The driver rushed to the nearest phone to call 911, but paramedics pronounced Breedlove dead at the scene. The incident still makes little sense, particularly given Breedlove’s experience and preoccupation with safety.

Upon receiving the news, RAAM director Jim Pitre wandered around the Durango time station in shock and made plans to cancel the race. However, Breedlove’s twin brother Bill encouraged Pitre otherwise, that it would have been Breedlove’s wish for the race to continue. Riders were given a time credit to grieve the tragedy, and RAAM went on. Pitre immediately effected a new rule that riders could not proceed without their pace vans.

Cycling is an inherently risky sport. Breedlove stated in his 2005 RAAM bio that the thing that most intimidated him about the event was “the possibility of injury or death.” No matter how skilled the rider, how dedicated the crew, how peaceful the route, there are uncontrollable factors in any endeavor that tests the limits of human physiology and psychology. Breedlove’s accident exemplifies the danger, but his example also reminds us that we ride bicycles because riding enriches our lives so much. In particular, our wheels lead us to meet wonderful, unforgettable people like Bob Breedlove. 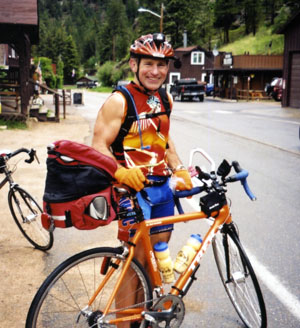 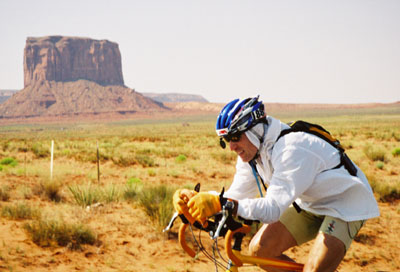 Breedlove was a superbly fit athlete with a smile and a classic Midwestern willingness to engage anyone in conversation. For example, tandem stoker Stuart Stevens recalled that during their 2003 Paris-Brest-Paris (PBP), Breedlove noticed a Swede at a control who was about to quit. Breedlove gave the rider a lesson in mental imaging and breaking the long ride into segments. That rider went on to finish, and upon doing do embraced Breedlove and burst into tears.

Breedlove was not only a racer, but also a randonneur who loved these long, unsupported events. Last year he rode the mountainous Colorado 600K brevet lugging a boom box on the back of his bike, serenading riders with the Beach Boys! This spring he also rode the Dave Holmes’ Memorial Brevet in Eldridge, IA. Holmes, the driving force behind ultra cycling events in the Midwest since the early 1990’s, was struck and killed last year while riding.

The term “legend” is often a cliche; so let its use here not be slighted. Breedlove was legendary for doing it all: father of four, elite athlete, orthopedic surgeon, and church deacon. Born February 29, 1952, he was raised in Kewanee, IL with three brothers and a sister. He met his wife Gretchen when he was just six years old, and they married when he was 23. He earned his bachelor’s degree at Illinois State University, went to medical school at Southern Illinois University, and did his residency at the University of Missouri School of Medicine. They raised their family in Des Moines, IA: Molly Wince, 27; Ann Brown, 25; Erika Breedlove, 21; and Bill Breedlove, 20.

Breedlove was an orthopedic surgeon specializing in hip and knee operations. His colleagues described him as compassionate, skilled, humble, and playful. One story goes that a teenage patient was having a tough time recovering from an ACL repair, complaining to the nurse that he was constipated from the painkillers. Dr. Bob rushed into the exam room wearing latex gloves and carrying a plunger: “I hear you’re plugged up!” When patients’ recoveries progressed slowly, Breedlove encouraged them with his keep-going attitude, the same mental disposition that made him such a great ultracyclist.

Breedlove led a principled life, dedicated to purposeful action. And he was passionate about life, including bike racing. When racing he remained true to his principles, always helpful to others. In this year’s RAAM, he consulted with Cat Berge about her painful knee. Sometimes he would half-jokingly supply his crew with water and food with the assertion that they needed it more than he did. During RAAM 1988, WUCA Hall-of-Famer Steve Born recalled Breedlove passing him in the 103-degree desert heat. Breedlove quipped, “It never gets this hot in Iowa.” Breedlove’s humor motivated Born to continue. The next day, he learned that Breedlove had stopped racing for a while in order to aid a motorcycle accident victim. 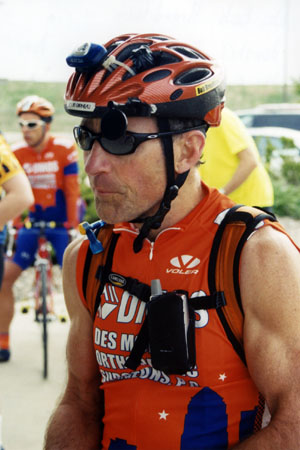 Breedlove was not always a fast rider. Always humble, his recalled his first attempts at the Des Moines Register’s famous cross-Iowa tour (RAGBRAI) in the early 1980’s, when he was one of the last riders to reach the end of each day’s route. Not to be beaten by the course, Breedlove eventually made a habit of riding an entire RAGBRAI in one day, finishing with the last riders as they approached the Mississippi River. The feat is still a topic of conversation for the tens of thousands who have ridden the event.

Breedlove was so outwardly low-key that it seems implausible that he could be a focused, driven racer. But that he was. In his 2005 pre-race analysis, RAAM guru Danny Chew labeled Breedlove as “the greatest rider to never win RAAM.” Breedlove’s race resume included three solo RAAMs (never lower than eighth place), two tandem RAAMs (1990 and 1992, both wins), and four PBPs. In RAAM 1989, he rode from Des Moines to Irvine, CA, raced to New York, taking third in RAAM in 9 days, 2 hours, and then rode home to set the double-transcontinental record of 22 days, 13 hours that still stands. In 1994 he finished RAAM in second place, only 90 minutes behind winner Rob Kish.

Breedlove set the 50-plus transcontinental record in 2002 using a course designed by 1992 RAAM tandem partner Lon Haldeman. Breedlove started at Huntington Beach, CA, and rode to Atlantic City in 9 days, 19 hours, and 47 minutes. He was riding to memorialize and raise funds for fallen emergency workers, including those of 9/11. En route, stopped frequently at firehouses to greet those he was honoring.

Despite these ultra performances, Breedlove’s most cherished athletic feat was riding the 1999 Elite PAC Tour with his then-14-year-old son, Bill.

Dr. Breedlove sponsored the Des Moines Orthopedic Surgeons Cycling Team. Several dozen team riders cycled to his funeral, stood in a silent peloton while the 1200 mourners were seated, and then sat in honor of Dr. Bob. Ushers handed out orange gloves and orange lapel ribbons: “Prescriptions from the Doctor to follow your dreams.” His son Bill summed up everyone’s sentiments: “We came not because he was a skilled surgeon or a great cyclist, but because we had each been touched by his kindness.”

RAGBRAI dedicated its July 27 leg to Breedlove’s memory. Iowa governor Tom Vilsack made a proclamation, read by his wife Christie, who herself was riding RAGBRAI in memory of a brother who died cycling in 1996. Many items from Breedlove’s cycling career were on display. His twin brother Bill cycled wearing the same pair of gloves his brother wore on his last ride. Many riders wore orange T-shirts and wristbands, which may still be purchased at www.bikeworldiowa.com, with proceeds going to the Des Moines Trails Foundation. 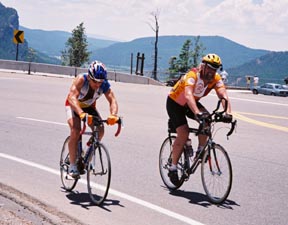 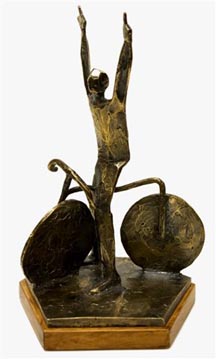 The Insight Race Across America bestowed on Bob the 2005 Lifetime Achievement Award. The handsome statue was presented to his family.

The WUCA Board of Directors posthumously inducted Breedlove into the Ultracycling Hall of Fame. The Hall of Fame honors those who, in addition to athletic excellence, demonstrate service to the sport, leadership, and consideration and helpfulness to other riders.

And even in our grief, we can still hear him say: “It’s another day in paradise.”

Bob was inducted intothe hall-of-fame in 2005.