Congratulations to Steve Coss and Jen Malik for setting the mixed pair (2xteam) – record on a standard bike in the 18-49 age group.

Here are the start, end, and way points observed: 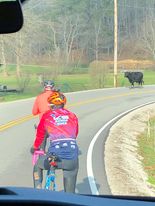 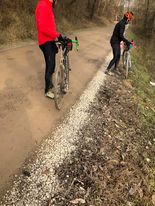 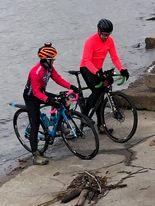 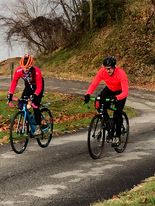 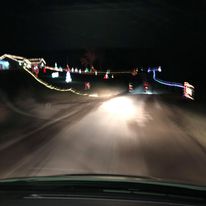 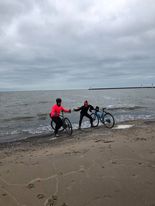 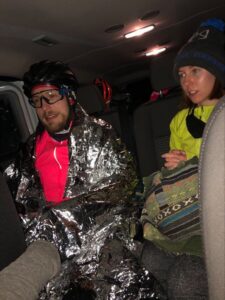 At 9:33AM Jen and Steve dipped their rear tires into the Ohio River at the base of the South Point Boat ramp and began their epic Ohio S-N Circumnavigation Record Attempt! The first century or so of the journey was relatively mild with conditions in the mid-40s during the day. Early on, despite the advice of their Chief Crew Master, Chris Boyle, Steve and Jen decided to run higher tire pressures (50 psi) to account for the large amount of paved roads in the beginning of the route. This made for a very chattery and bumpy ride as they trekked through the gravel of Wayne National Forest. As Jen stated, “High tire pressure aside, it was way more fun riding the gravel roads than driving them in Steve’s Honda Fit during recon!”

With such a long distance to ride and a majority of it being through the night, accounting for the large temperature swings was key and quite the adventure. Jen and Steve, with the help of their crew, had to stay on top of regulating temperatures to avoid becoming wet due to sweating. This was paramount when it came to the success of the ride. How did they successfully do this you may be wondering? The riders kept warm and dry with liberal use of emergency blankets during stops, several changes of socks and base layers, and hand warmers everywhere. Before nightfall, Jen even changed out of her thermal jersey and thermal jacket and into a base layer with a winter riding shell. Since she is a smaller rider and struggles with cooler temperatures, this allowed her to start the night sweat free with ample wind protection. Once the sun went down things quickly got dark and cold with temperatures dropping to 28 degrees.

As they moved North, the road conditions decided to throw a little more adventure their way. Dry hard pack and well bedded in gravel was a thing of the past. Much of the course was covered in recently graded mouse head gravel and much of Ohio had seen rain and snow earlier in the week. FUN FACT! Spirits were still soaring high and it was determined that all gravel comes in animal head sizes. That meant two important things 1) a seriously bumpy ride and 2) Belgian world cup-style cyclocross mud.

Remember that higher tire pressure? Ten hours into the ride Jen ended up paying for running higher pressures. The increased need to shock absorb had resulted in muscle fatigue which then triggered shooting pains in her elbow. With the increase in pain came an increase in technical gravel riding (the best part according to her) and the inability for her to use her right hand to hold the bars. When they reached Nelsonville everybody rejoiced in the deliciousness of Sonic tater tots while Chris tilted her bars up to help reduce the weight on her elbow. With a belly full of tots and some vitamin I (Ibuprofen), they were back at it! That did not last for long before she was unable to hold onto the bars again and the decision to go in the van and try to recover (via hot hands!) and rest was made. After 4 hours of rest and a complete cockpit swap a la ERG, Jen hopped back out there and was ready to rejoin Steve. This only lasted for a few hours before the pain came back and she once more needed to go into the van. Having to make the decision to not ride the whole route was harder than any interval or climb that she had done. Despite this, her spirits remained high as it marked a huge milestone in her growth as a rider. Plus Steve was killing it out there! She kept thinking about how in just a few short months he went from struggling on a 4 hour ride to absolutely slaying a 500k in Winter. How could you not be pumped and filled with happiness?!

It was now all up to Steve! As things got really chilly in the middle of the night, Steve charged forward and crushed every hill in his way. Around Mohican State Park, the support crew was remarking that Steve was picking lines that were covered in ice. Why!? As if he had read their minds, Steve somewhat deliriously remarked, “It turns out that the thin veneer of ice on the surface of the mud in some places provided better traction!” Looking back, it makes sense because as it cracked under a tire, then the mud did as well. As if things weren’t interesting enough, nature had to have its due impact. During the ride three different bucks nearly turned him into road pizza, and two different owls swooped on him for a better look! The majority of the night passed with so many strange things to see that Steve was wondering if he was hallucinating. There was an array of Christmas farms so far away from any population centers, that the degree of decoration was unbelievable.  One had the entire property line covered with LED light ropes! As the night wore on, Steve met his most challenging task. The Mohican area was exceptionally muddy, and is always filled with technical climbs. It was also mentally tough, because Steve had been riding alone for hours in the dark, and started to fall behind on nutrition.

With daylight arriving and the route mellowing, Jen was determined to finish out the last 80ish miles with Steve (who was still riding incredibly strong)! Together they took turns pulling into the harsh Northern OH winds with Steve taking a majority of the pulls. At this point the crew and Jen were 90% sure he was a robot or alien. The last 30 miles by far seemed to be the longest and the crew continuously reminded Jen and Steve that it was all downward trending from here. Jen and Steve kept trucking along, watching the miles tick down and with less than 20 miles to go Steve’s Wahoo battery died. They had been using battery packs to charge devices such as bike computers and lights but those batteries were no match for the cold temperatures and wind chill. After a quick stop to put the Wahoo in the van and charge it (Jen had the route as well), they were back on their way. 10 miles, 5 miles, 3 miles, 2 miles… surprise 500 ft elevation gain! And just when they thought that the last hill was going to defeat them they heard their crew blasting their pump up song. A fire was ignited and Steve and Jen charged up the hill. Or went up it as quickly as two people who had been riding for over 300 and 200 miles could.

On December 6th, at 2:43PM, Jen and Steve rode their bikes past the Vermillion lighthouse and onto the beach where they dipped their wheels in Lake Erie. Everybody in the van charged out and filled the air with cheers and applause. They had done it!

Why attempt a WUCA Record and not just do a ride? The idea of setting a record for others to attempt was incredibly appealing. Ohio has very few WUCA record attempts by women and co-ed pairs. In completing this ride, Steve and Jen want to inspire others to brave the Ohio weather this Winter and grind some gravel. They also want to bring awareness to different kinds of riding and challenges that are accessible within Ohio. Especially with mass start events on hold for the foreseeable future.

So, what did they eat? A breakdown of their nutrition can be found below:

Her goal was to eat between 200 and 200 kcal an hour. The plan was to alternate between drinking GU Roctane drink mix and solid foods (such as a potato, banana and PB burrito, or sports bars). Jen doesn’t drink a lot of caffeine and her stomach became uneasy with the increased dose. As a result she switched to a non caffeinated drink mix with the same amount of calories. Success! For her, riding this long was uncharted territory when it came to nutrition. She faced some gut problems but with the help of a bento box full of tums she was able to stick to the plan.

His goal was 400 calories and hour. This included 200 calories of tailwind drink mix half caffeinated (colorado cola) half regular (orange), and a baggie of one of three different snack mixes every hour. These included pralines, honey roasted mixed nuts, and a peanut butter pretzel snack mix. Regular consumption of Tumms kept the yuck at bay.  Emergency Plant based ensure came in handy more than once (one time also included several handfuls of different chips…).

And the bike setup? A breakdown of their bike setup can be found below: