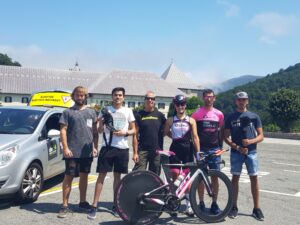 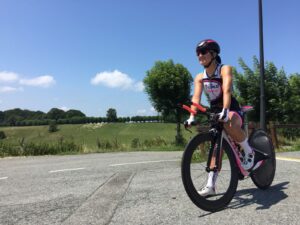 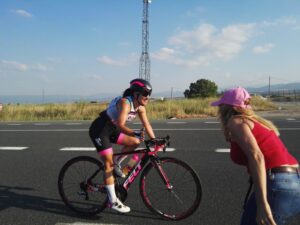 My name is Ziortza Villa and I am an ultra cyclist rider. After having taken part in both long distance national and international events, I decided to establish a record and thus be the first woman rider to establish a record from Roncesvalles in Navarra to Santiago de Compostela in Galicia.

I carried out the event on the 25th and 26th of July 2018. I parted from the Roncesvalles guest house called “La Posada” at 13:00hrs on July the 25th, festivity of Santiago, patron saint in Spain, on a hot and superb summer day.

After riding through “Navarra” and “La Rioja” at sunset, I arrived in Burgos, not before climbing the “La Pedraja” mountain pass which has an altitude of 1,150mts.

I then rode through the night with a mild temperature and a full moon from Burgos to Astorga where I saw the sun rise.

During the night, Julian Sanz my colleague rider on the men´s attempt for the same record, who had parted from Roncesvalles later, finally overtook me.

After riding in the morning hours along the roads in the province of Leon, I reached Villafranca del Bierzo and started to climb the “Piedrafita-Ocebreiro” mountain pass in the region of Galicia. At noon, I was 1,335 mts high on the “Alto del Poio” mountain pass.

After coming down I endeavored through undulating and winding roads in Galicia to finally reach the “Plaza del Obradoiro” in Santiago de Compostela at 23:20. This was 762 kms. later after riding for 34 hours and twenty minutes.

The crew who joined in this record attempt were Roberto Vega, head of the team and Ioritz Villanueva. I dressed and used the usual equipment in which I ride comfortably. I tried to eat and drink what I usually do and have done in other prior attempts in order to avoid delays.

The best part of this attempt has been the ride from Burgos to Astorga, on the flat lands of Castilla under a dramatic night full of stars accompanied by a full moon. The worst perhaps the hard climb to the “Piedrafita” pass in the midday heat.

It is the first time I have gone further than 750 kms and ridden over 24 hours. Riding through such breathtaking countryside and the wonderful scenes has been a marvelous experience and I am very happy to have managed to reach Santiago de Compostela. 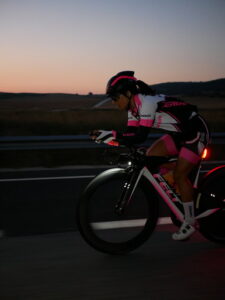 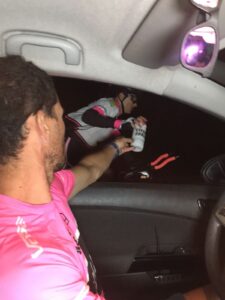 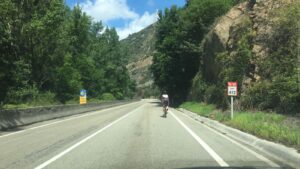 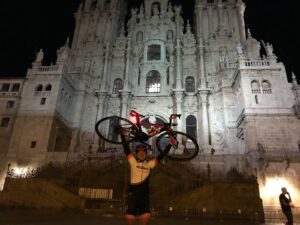