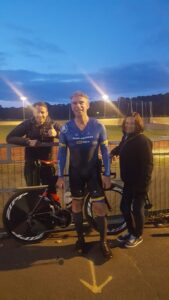 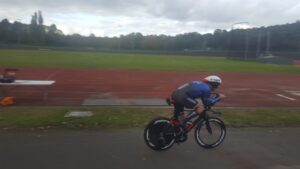 Record Attempt: – 100km, 200km and 6 hours on an outdoor track
Rider: – Peter John Horton, 53 years old, United Kingdom
Crew: – Susan Horton
Official: – Simon Chetwynd
Following on from attempting and setting 4 records with Matt Hancox in the 2-man
relay on the 10th October I had booked the Scunthorpe track the following weekend.
This second weekend I felt more used to what was expected as I had never ridden
on a track before the previous week’s effort. The day was slightly cooler than the
week previously but with lighter winds. Concurrently I was also attempting the British
outdoor hour record in age group which means for the record to stand you have to
beat any record time set by a British rider at your age and all record times for any
rider who is older than you. The British rider to beat had also set the UCI worlds best
master’s performance for the hour this was set on an inside track.
I clipped in and set off unfortunately my power meter stopped working after a couple
of laps so I continued on setting my pace on heart rate/feel but also on fantastic
feedback from my wife Susan giving me my lap times/if I’m on track to beat the
records plus average speed.
I set the quickest British 20km/15mile/25mile and pushed to beat the hour record on
an outside track these are currently subject to certification. I then kept the pace going
for the 50km British record also subject to certification at this point I was starting to
feel cramp in my left calf so backed off and took my first drink and energy bar/gel I
kept going but at a slightly slower pace to try to get some recovery.
I knew the 100km record was the next target and I was getting great feedback on
where I was on target for that record, I knew with a few laps to go I needed to up the
pace so I really pushed just breaking the 100km record by a handful of seconds.
After this I backed off to get a breather and my next target was the 200km record
which I knew would be approximately 2 1/2 hours later. I continued to get great
feedback on my estimated time and I was kept occupied by recaps of my times for
the previous records.
My chain came off a couple of times from my rear cassette but I was able to get it
back on, I think in transit the gears had been knocked.
I hit the 200km record with a few minutes to spare and then continued on for the 6hr
distance record the original plan was to continue on for up to 9hrs and the track lights
were on I told the pits I would stop after 6hrs as the lure of a British pint and a steak
was too much. I hit the 6hr distance record and stopped happy with my ride.
Equipment: I used my Scott Plasma 3 with a disk Zipp wheel.
Food: I had hydration tabs, clif energy gels and bars.
Best Part: Working as a team again plus getting fantastic feedback on exactly my on
target times, which also made me realise towards the end I could relax a bit as I
knew I was on target.
Hardest Part: After just over an hour I started getting cramp in my left calf so having
to back off to manage it plus my chain came off on the back straight a couple of times
but I was able to get it back on.