Congratulation to Matt Stevens who set the male (18-49) Standard record for the Wales S-N. He rode the 174.4 miles in 13 hours an 25 minutes under some very cold and challenging conditions.

He now owns the S-N and the E-W record in his age-group! 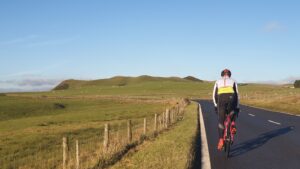 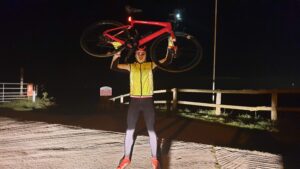 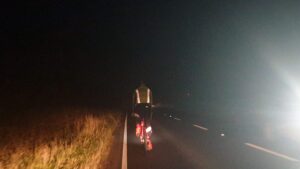 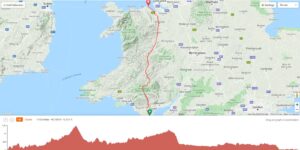 I, Matthew Stevens, am writing this report following my successful attempt to establish a solo across country record for Wales (South to North), following an earlier abandoned attempt in April 2019.

I was particularly interested in this record, as it was one that had not yet been achieved. The year previous I managed to break a WUCA record for East to West Wales, and I felt that this was the obvious next step.

At 07:24 I set off from the entrance to the ‘Barry Island Carpark’ on Friars Road in Barry, one of the most southerly point in Wales.

Conditions throughout the most of the ride were very good for the time of year. Dry, wonderfully sunny, but only about 5 degrees C.

Although I had a total of 3 bikes on the follow car, I infact remained with one for the entirety, a good lightweight and comfortable Ribble Endurance SL. A bike I had only owned for a matter of weeks!

Wales is an extremely beautiful country, and crossing the Brecon Beacons national park was particularly enjoyable. Climbing the main road through the heart of this area, the rugged landscape along with the snow-capped hills were breathtaking – and not only because I was climbing!

Darkness fell at around 16:45hrs, meaning that for the last 4 hours the temperature dropped to below freezing, which resulted in very cold fingers and toes, forcing me to take regular brief retreat in the warmth of the follow car to de-frost!

At 20:49, 13 hours and 25 minutes later, I arrived at the entrance to Talacre Beach Carpark, the most northerly point in Wales.

This is now my second WUCA record, and marks the end of my 2019 season. I now look forward to a few weeks off the bike, before getting ready for 2020 – and hopefully another record or 2!