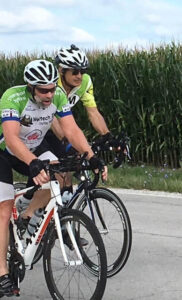 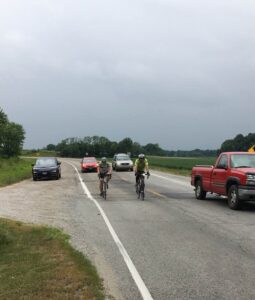 The weather was excellent.  The high was only about 78 and we had a pretty nice tailwind.

Our crew consisted of Ellen Wolcott (my 2014 RAAM and 2016 NCOM crew chief), Marcus Ricci (RAAM crew and NCOM crew and has now crewed with us five times!), Judy Looby (RAAM off-site crew, NCOM crew, Cross-State record crew last year), and Jerry Boyd (RAAM off-site crew).  Our Official was Melissa Boyd (RAAM off-site crew). The crew kept us very close to 15 minute shifts so we could push hard and then rest for 15 minutes. It was my first team event and I enjoyed it. Three of the main challenges of solo ultracycling are hydration, getting enough calories, and not going so hard that you blow up.  With a team and regular breaks, these issues are not difficult to manage so it is much easier to stay on an even keel.  On the other hand, riding at such a high intensity for so many intervals was quite a nice challenge. 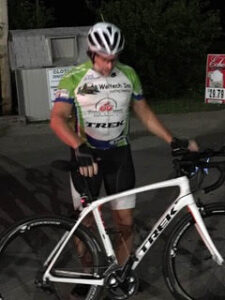 What were conditions like?  The temperatures for the start were in the upper 60s Fahrenheit, with a light breeze from the north-west. As the day progressed the tail wind increased to 9mph with maximum gusts of 25 mph. The early winds were from the north-west and later from the west. The skies were overcast for most of the ride. Visibility was 10 miles. The temperature climbed to about 78 degrees then dropped again as it began to lightly rain towards the end of the ride.

Why did you want to do a record?   I was inspired to go for the record in that I had wanted to cross the state of Illinois on a bicycle. I also noticed there were no records listed for a two person team for crossing the state.

What equipment did you use? Anything special?  My bicycle is a standard tall frame 64cm road bike, with about 16,000 miles on it. The brand is Trek and the model Madone Project 5.2 triple, about 8 years old. It has Shimano SPD mountain pedals, and I used ZIPP 404 clincher wheels for the record attempt, with Bontrager R3 tires. My tail light was a Bontrager Flare R and I used a Cygolite headlight and kept it on for the entire attempt. My saddle is a Selle. I communicated with the follow vehicle using Terrano four channel intercom radio units.

What did you eat & drink? I used Gels, energy bars, ate a peanut butter and jelly sandwich for lunch, drank lots of water, and had sports drinks. I had a half full water bottle on the bike but never used it. Food and drink were done while I was off of the bike and in the leap frog vehicle.

For nutrition my needs are a little different from most people in that I am type 1 diabetic.  I use a pump and set the basal at 50% and checked my blood sugar level every 15 minutes with a meter. My pump also checks the intestinal fluid every 6 minutes and gives me a graph readout. So there was a lot of monitoring going on during the attempt.

What was the best part? The awesome team of friends who assisted us with doing this cross-state ride as crew and official. This was my first team cycling experience and it was both exciting and challenging.

What was the hardest part? The hardest part was when I somehow threw my chain off of the large chain ring and then did not want to stop to fix it. I managed to get it back on by pedaling and gear shifting, and it was fine for the rest of the ride.. .

Did anything particularly unusual happen? The most unusual thing was when another cyclist using the same route approached me in the dark as I was ready to do an exchange.  I was somewhat puzzled in that the follow vehicle should have been directly behind him, and as he got closer, I realized he was not our rider..