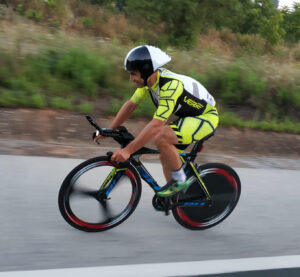 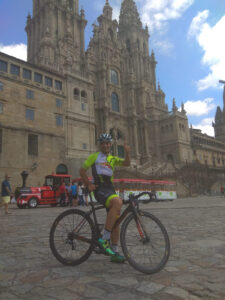 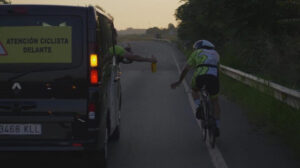 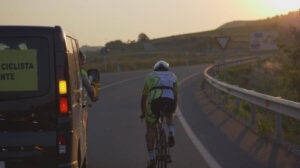 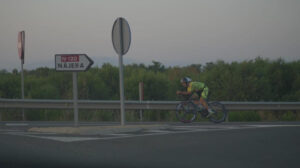 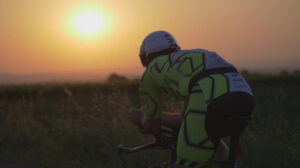 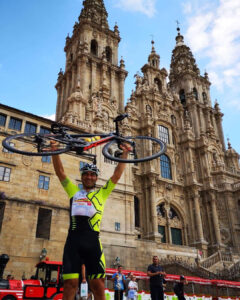 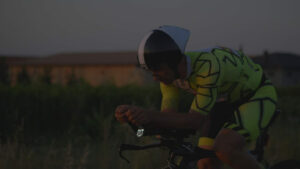 • Record attempt, POINT TO POINT RONCESVALLES – SANTIAGO DE COMPOSTELA (Camino de Santiago)
• Name of rider: Julián Sanz García
• Start date and exact start time to the nearest minute: Record Start Date: 2018-07-25 / 16h13min00sec
• Exact start location described so that someone else could find the same spot. In the town of Roncesvalles, in front of the hotel “La Posada” where it indicates the beginning of the town of Roncesvalles.
• What were conditions like? Sunny day, 23 degrees of temperature, north wind and with forecast of storm.
• Why did you want to do a record? In 2006, 2007 and 2008 I made the attempt to do it in 24 hours with the aim of publicizing the specialty of ultracycling in Spain. Now eleven years later the objective has been to know what I have improved as an athlete in this specialty.
• What equipment did you use? I used a TT bike on the flattest part of the course. Anything special? An important feature is that we expect to determine the day of the record when the weather conditions were the best to achieve it, which made it much more complicated to organize everything.
• What did you eat & drink? Liquid feed in 100% of the development of the record.
• What was the best part? All the part that corresponds to the area of ​​Castile, a flat area where you could advance a lot and that was also made at night and with very good temperature.
• What was the hardest part? The last 200 kilometers in the area of ​​Galicia, where the route has not a meter of flat and the wind was against, which made me doubt to be able to get it.
• Did anything particularly unusual happen? The development of the record was very regular, without any particularity, except for the arrival, where we did not go for the best route and it cost us to return to the route in which it was possible to reach the end.
The start time of the test (16:13) is the one that marked inside the vehicle tracking
The rest of the timetables are also taken with the vehicle’s clock
17:00 (Km 38 approx.) Puncture, change wheel lenticular
The passage through Pamplona is done without a follow-up vehicle, only accompanied by Local Police 06:25 Stop 4 minutes to stretch the neck
Km. 579 change to traditional bicycle (up to this point and since the beginning it has used a time trial bike) 15:20 (Km. 750) Retained by the police on the A-54
15:27 The march is resumed only accompanied by the Civil Protection vehicle until the end of the race.
• Exact finish location described so that someone else could find the same spot. Plaza del Obradoiro in Santiago de Compostela. It is accessed by Rúa de San Francisco street and as soon as you finish that street, you reach the square.
• Exact finish time 2018-07-26 / 15h50min00sec  TOTAL: 23 hours 37 min