6:10 Sunday 11th February 2018 saw me depart from Al Alam palace, Old Muscat Oman (Longitude: 23.612731176549353 Latitude 58.59390061173099). The support from cyclists, friends and media who came to see me off is vivid in my mind, so too was the gastroenteritis I developed the night before; the level of dehydration this added to my body before the start was surely catastrophic, but something I had to hope I could marginally compensate for with the water and electrolyte supplements I was taking.

The passage across the city of Muscat was unmarred by issues, but memorable for all the people who were waiting at the sides of the roads to cheer me on. The gastric distress I was suffering forced me to briefly stop near Fanja, 90 minutes into the attempt and worryingly, lose close to another half a liter of liquid. Putting this to the back of my mind I continued on, beneath the foothills of Oman’s Hajer mountains until the afternoon, rice cakes and energy drinks fueling me along at close to 38km/h for the first 6 hours, until my first stop for a warm, sit down meal. Afternoon into night one meant hundreds of miles pedaling along the same lonely desert highway, where temperatures were expected to peak at 27oC. The reality saw the mercury rise to 31oC in the open, unforgiving expanses. Ice cubes placed into tights and picked down my back, as well as regular spraying with water and alcohol from my support team was failing to allow me to effectively thermoregulate. Climbing from my bike at close to 2pm, not feeling right, I was placed in shade underneath one of our trucks, whilst everyone worked with wet towels, ice and alcohol spray to bring my core temperature down. Within minutes, Intense pins and needles developed all over my body, I began to lose feeling and control of my muscles and speech, my arms and hands became rigid and my chest began to cramp. After 20 minutes and much effort from my team, they managed to help me recover. I am under no illusion that I was very close to death through heat stroke and despite hiding it well at the time, this was very scary for everyone around me. Resuming and continuing into the night, the crosswinds were now fierce and unforgiving, I knew that my two bouts of sickness had taken a tremendous toll on my body and in order to continue, I had to considering incorporating power naps to aid my recovery, the first of which was timely, as by the time I returned to the road, the winds, to a large extent, had abated. After a beautiful night travelling along Oman’s central coastline, surrounded by the vivid light from the Milky Way and the occasional crab scuttling along the road, I found myself through the city of Duqum and enveloped by thick fog as the sun rose in the early morning. I had reached just over half distance in 24 hours and knew that I was going to have to dig deep to repeat this average speed on the second day.

It provided an incredible boost in motivation to encounter spectators who were tracking my journey, come to the side of the road, even out in the wilds in such remote locations, to photograph and cheer me on. With stomach cramps which had plagued me all night abating, I was able to adopt a more aerodynamic position on my bike and try and make some headway into the day’s journey, before the inevitable midday desert heat slowed my progress. Temperatures rising faster and higher than the previous day, unbeknown to me at the time, I was consuming almost more water than my support crew were able to source from the infrequent shops along the route. The temperate after midday rose above 37oC, for a day that was to be entirely staged in vast desert. I knew I couldn’t afford to lose the precious hours of pedaling in this mid part of the day; to avoid a repeat of the previous day’s complications I chose a strategy of 30 mins riding, followed by short stops to be cooled by my team. This wasn’t easy but did allow me to push on without developing further sickness. With 400km to go and the road now narrower and void of a hard shoulder for the most part we were pulled over by the police and instructed to place one of our follow cars in front of me. We did this but made sure it was far enough infront to negate any drafting effect and not contravene the rules. At roughly 20:30 I crashed heavily at 40km/h after hitting some large potholes. Bruised and bloodied, I quickly picked myself up, switched bicycles and continued. Any further rest had to be kept to a minimum, breaking the two-day mark was going to be touch and go. 80 km from Salalah and my finishing point, I reached my final road into the city and was met by an incredibly enthusiastic Medina Ilyassova, who had not only believed in me and backed my idea with her company UB-COOL months ago but had now flown down to Salalah and driven out to meet me. At 700m above sea level there were a few very steep kilometers of climbing across the Dhofar mountains to reach the final 900m summit, before ascending to the coast. Cresting the summit at 4:30 in the morning I was overwhelmed to be confronted by tens of Omanis who had heard about what was happening and who had come out to cheer me on. A 90km/h descent, riveted to my top tube and I was in Salalah, confronted by crowds of people, young and old who had all come out at such an ungodly hour, to welcome me with huge illation, after unbeknown to me, oblivious over the past two days, news of what I was doing had been spreading both across the country and internationally.
Our initial GPS coordinates for the palace were inaccurate and we were directed to the correct location, a few kilometers away (Longitude: 17.000252  Latitude: 54.097257).After 47:21:00 since departing Muscat’s palace, at 5:31 on Tuesday morning I arrived at the Al Hosn Palace in Salalah and finally earned the reward of climbing from my bike one last time and having a Union Jack, kindly lent by the British embassy, draped around my shoulders. I had been through some difficult times over the two days, finally finishing dehydrated, with 6% less body fat, nerve damage in my feet, a bruised tibia, and some deep flesh wounds but it was an incredible adventure.

Always the unsung heroes of such feats are the people who surround you and support you and this couldn’t be more true. My Omani brothers Khalil and Talal who refused to leave my side throughout the two days to even sleep, my film crew of two and new friends Omar and Mahmoud from Kuwait who found themselves quickly emotionally invested and taking a very active role in everything, Randall Bernard who volunteered to train as a UMCA official and come along for the ride, my dear friend Christiane Prager who flew from Dubai to lend a hand and most notably of all Heather Louise Duncan, who has invested more of her own time and effort into this project over the past couple of months than I could I have ever asked, who trained as a race official, publicized and promoted the journey throughout and kept everyone watching updated and informed, who was also a calm voice of reassurance throughout and someone who has become a great friend.

My sponsors UB-Cool, Prismic Media, Husaak and Oman bike shop who all made this possible, all the great friends I have who were often bending over backwards to help with my preparations and finally, thank you the officials of the UMCA who were so accommodating with the establishment of this record. 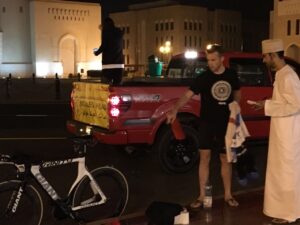 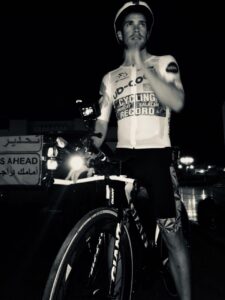 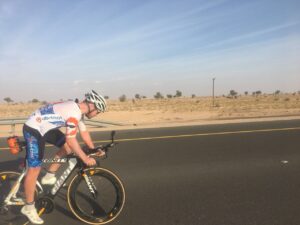 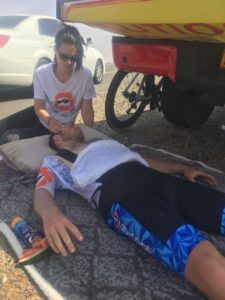 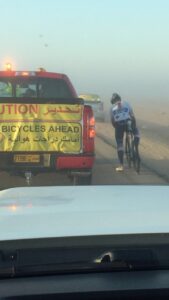 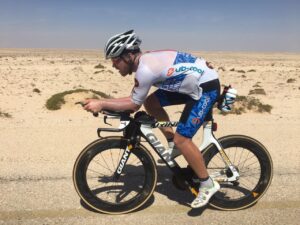 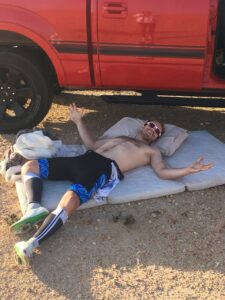 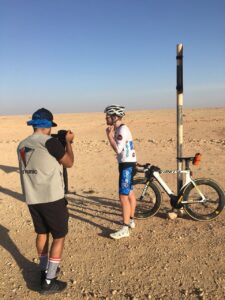 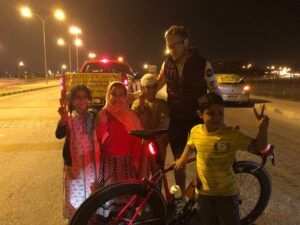 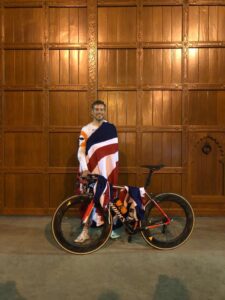