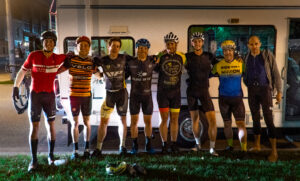 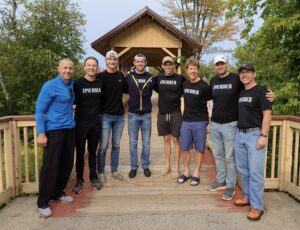 The ride started from the state line in Sturgis, MI in the dark at 4:22am and finished in the dark in Sault Ste Marie at 8:18pm. The first 5 hours were under 40 degrees with temps as low a 32 in some sections. Once it warmed up, the team got comfortable and settled into a great pace for a beautiful ride. The team utilized a team time trial-style approach, taking turns riding in the front to try to maximize efficiency and cover the course as fast as possible. All 8 riders were on the road for a majority of the ride. We had fast, efficient nutrition breaks every 3.5 hours. 4 riders would continue to ride while the other 4 hopped in an RV to eat some food and refill water bottles before rejoining the group, etc… All “shift changes” followed WUCA guidelines and were allowed per WUCA rules. Most riders road a total of around 310 miles but at least a portion of the team was riding throughout the 369 mile journey. All 8 riders started and finished together.

Other than a cold, dark start to the day, the ride was pretty drama free. The team did suffer a few mechanical issues including one flat tire, one broken spoke and 2 dropped chains, but for 8 riders over a 369 mile course, that was fairly insignificant. The cyclists obeyed all traffic laws, stopping at stop signs, traffic lights, etc, but the clock didn’t stop. So although we average 23.2mph, we were riding at 24mph most of the day (stops eat up lots of time!).

The ride and record were a total team effort with MVP honors going to Ralph Buckingham who was a total workhorse on the front for much of the day. This was the first time these 8 riders road together and it will be a ride we’ll remember forever.

As far as how it went: Awesome! We painstakingly planned and as far as things like this can sometimes go, there really weren’t many surprises, nothing that required quick contingency planning, at least. I was pleasantly surprised by how few mechanical issues we had. I think it was just one flat and a busted spoke- pretty good for roughly 2500 miles combined. I was a little surprised by how hilly some sections were, I had anticipated a flatter route from what I had studied on the elevation profile, but it can be hard to see all the ups and downs on such a long route. I was also a little surprised at how cold it was. I was anticipating it briefly dipping into the mid, maybe even low, 30s, but we were seeing frost already just past Sturgis and all the way up into Ionia. We were all freezing cold by the time we got to the RV for our first nutrition stop almost 4 hours in. My arms were so cold that my hands weren’t working right, toes were numb even with toe warmers and booties (shoe coverings), and my vision was cloudy and I was seeing halos before I put several eye drops in. But it eventually warmed up and our spirits lifted with the rising sun. I think our breaks took a bit longer than we had anticipated, and if we did it again, I think we could revise those slightly, but all in all it really went well. After about a third of the way in (120miles) I started to do the math to figure out our pace. It was in the 16h30m-16h40m range at that time I think just from rough calculations in my head. At 40% complete, with the tailwinds just starting to ramp up it was starting to look like we could do it in 16hr15m-16h20m, which is kinda where it stayed for a bit. It wasn’t until getting back on the bike after crossing the bridge that I first thought about shooting for sub-16.

Honestly, I thought I’d remember more about the scenery but a couple things stick out. First, how much difference there was in color once we got into the U.P. We weren’t really seeing much until then, but after the bridge it was like all the sudden it was Fall! Another scene that I’ll always remember is passing by an Amish horse and buggy in the middle of nowhere in the dark around 5am. It was so cold the horses were making tons of steam with the breath. I waved hello but couldn’t see if anyone waved back. They probably thought what they were seeing was just as odd. It was cool to see all the mist and fog in the morning just before dawn. There was a section just North of Battle Creek, the road was actually called North Ave, where we ran into some pretty thick fog in spots. It never got bad enough that it seemed dangerous, mostly because the road went up and down so much that the low sections where it all settled were short-lived. Of course the bridge was beautiful, but by that time I was just so focused on finishing that I didn’t even stop to take a picture.

Epic Ride 2020 lived up to the name! It was an awesome, long, hard, fun day of riding bikes. After a month of planning we had a pretty good idea of how the day would go, but 369 miles is a long ways and there are always a lot of unknowns. Only one rider (Nick) from our group had ever ridden more than 300 miles in a single day, so we were all entering uncharted territory. We all thought we could do it while maintaining a pretty fast speed, but you don’t really know until you try. That’s what is so exciting about these challenges and what draws me to them.

We hoped to finish the ride in under 17 hours, but there are only about 12 hours of daylight this time of year, so we knew we’d have to ride a decent chunk in the dark. We opted to get that out of the way early while we were fresh. We ended up starting at 4:22am and rode the first 3+ hours in the dark. We also finished in the dark. So while we got it done in 15:56, it sure felt like a full day! Another big challenge was the range of temperatures we saw throughout the day. The first 5 hours were under 40 degrees with a few sections as low as 32, which made it pretty difficult to get warmed up and comfortable. By midday we saw temperatures as high as 72 degrees, so a 40 degree span meant we needed to pack an array of clothing.

Riding in the dark in the early morning was a cool experience, but the combination of dark and cold made it difficult to get comfortable. Roads were quiet and we had to dodge piles of horse poop on the side of the road. When the sun finally started to rise, so did our spirits. Seems kind of strange but it wasn’t until about 150 miles in that I started to feel good. I felt like the longer we rode, the more in sync we got as a group and I personally just kept getting more comfortable and having more fun. That said, it sure felt good to get off my bike seat at the end of the 369-mile journey!

One challenge that I faced was a lack of sleep heading into the ride. Because I was in charge of a lot of the planning and details I was up late working on final preparations while my teammates slept in the hotel. I laid down for about 3 hours, but my mind was racing with morning prep arrangements. I think I slept about an hour before getting up at 3am. The cold morning temps probably helped wake me up and thankfully I really never felt like the lack of sleep effected me during the ride.

We had an awesome support crew and it sure gave us a boost every time we passed them on the road and heard them cheering. Awesome Team! Awesome Crew! Awesome Day! I’m grateful.