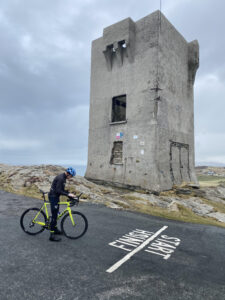 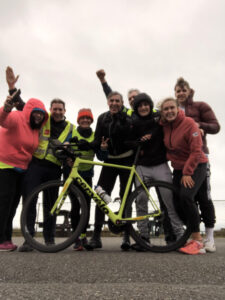 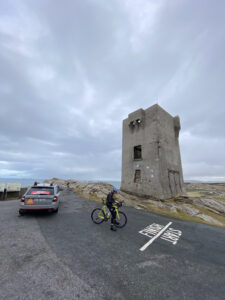 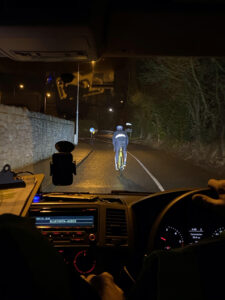 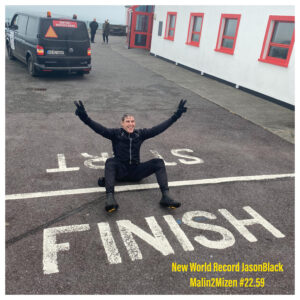 Reason for attempting record: To use this as crew and rider training for RAAM solo 2020 and try to break the existing record

Unusual Events: A tractor tried to run me over near Strabane

My main reason for undertaking this challenge was to allow myself & my crew to familiarise ourselves with each other and the world of ultra-endurance cycling in a race environment as preparation for my rookie solo Race across America starting in just over 3 months’ time.  For six weekends before my attempt Ireland was battered by storms and very heavy rainfall leading to a lot of flooding every single weekend so I was not holding out much hope of even getting to the start line. So I was pleasantly surprised when the winds died and the rain stopped for 3 days before we were due to set sail from Malin Head.  I was hopeful that we could at least make an attempt at this record.

On the morning of the race we left home (approx. 1 hour 20mins drive from Malin Head) and the further north we drove the heavier the rain came along with a mist covering what should have been beautiful views. We arrived at Malin Head, I had a quick bite to eat, re-set the Garmin and all trip meters & we were off. Temperatures were not as cold as we had expected at 6.5 degrees Celsius but the rain was constant right until I got to Quigley’s Point. Road conditions however were quite good and I was feeling good to power on. Thankfully with no traffic issues we were moving well on the course. By 3.30pm temperatures had increased to 10 degrees Celsius and it was a pleasant afternoon. Nutrition was going very well at this point and I was feeling strong.

As temperatures started to drop again I was starting to feel the cold a little so it was definitely a case of hot foods & liquids for me. There was no rain since Donegal until I was approaching Athlone where it began to drizzle for a while. With that came an increase in the wind and unfortunately for me that was a head wind. However at this point I was reminding myself how I would benefit significantly from that when taking on the second record of Mizen Head to Malin Head as it was blowing from a South Westerly direction.

Not much further into the record challenge I began to feel unwell. I think it was a mixture of too much salt on some of the food which made my gut turn and the volume of food I was trying to consume was too much. It was at this point too that the crew had an issue with the jet boil system that was being used to heat the soup, rice etc and despite their best efforts to repair it was unfixable. With no back-up plan this was to have huge consequences as one of the best foods for heat & digestion was the soup.

We ploughed on with the other foods we had but the damage was done at this stage and it was a case of staying on the bike and seeing out the first record challenge to Mizen Head. The bad situation was further enhanced with very strong headwinds upon entering Co Cork which continued to increase right up to the Head. It made for quite difficult riding conditions as the bike was being blown around a lot. The last 50k was extremely tough and the wind zapped a lot of energy from my legs. However I knew that the record was still on to be broken if I could just weather this storm for another few hours.

With a mere 5 minutes to spare I rode across the finish line at Mizen Head signal station to a very happy crew.

It was decision time then as to whether continue with the second record challenge. Because of the Nutrition issues I was not in any way confident that I could replicate the first half without the proper equipment etc. I also had a niggle in my left achilles and quad and was very mindful of the bigger picture with RAAM approaching fast. I was happy to call it a day at that stage and for myself and the crew to take away a lot of learning from the experience. A huge thank you to my crew for all their support and to the 2 race officials and WUCA records chair for ensuring everything was in order.

None of this is possible without sponsors so a big thanks to Mason Cylcles, Hunt Wheels, Team Donegal Oil, Qilta recovery, Letterkenny Pub, Germany and Pramerica for all their support