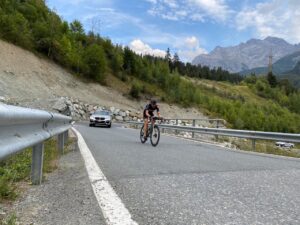 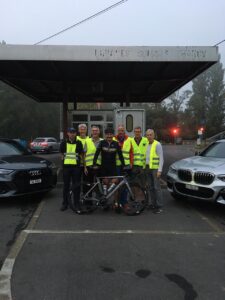 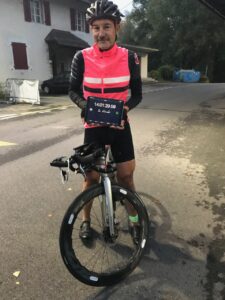 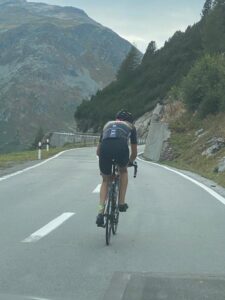 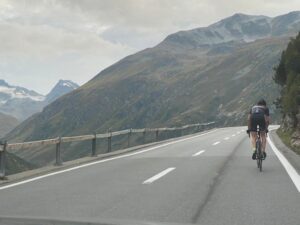 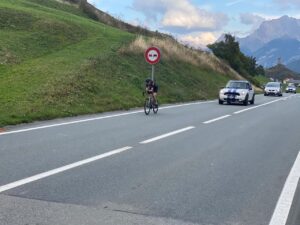 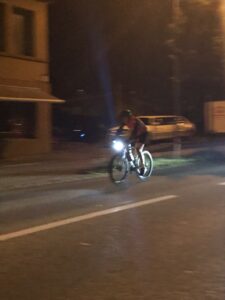 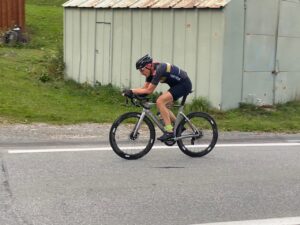 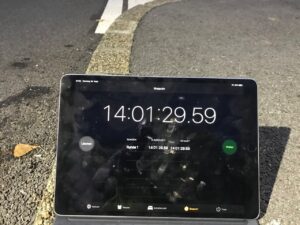 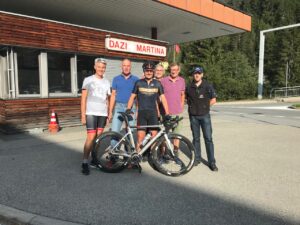 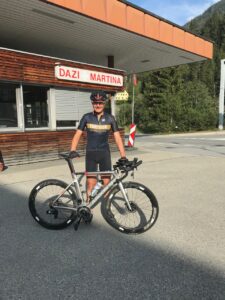 Weather:
I had wonderful weather for cycling without any rain. During the night, the temperature was around 15 degrees Celsius. At the beginning of the ride I had little tailwind and afterwards windless conditions.

Bikes:
I did the race with my Argon 18 Nitrogen with aero handlebar attachment. Only for the climb of Fluela pass I used my light Simplon bike.

Rider’s Report
After the abrupt end at the Tortour Solo 2020, I decided at short notice to attack the east-west record from Martina GR to Chancy near Geneva. Now I am standing at the frontier station in Martina in the Lower Engadine on Saturday afternoon, the weather is fine and I am looking forward to 500 good kilometres of cycling. A border guard quickly takes some souvenir photos of the whole crew and me. Now it starts. At exactly 5 o’clock (pm) I start with a little tailwind up the Engadin. Not only the speed, but also the pulse and the watt values are going up. In Susch I change to my lighter uphill bike and get up the Flüela-Pass well. After another bike exchange at the pass summit I can relax a little on the downhill ride, but I am stopped by a closed railroad barrier in Davos. Construction sites, red lights and barriers are also part of a record ride through Switzerland. But due to the night drive at the weekend, there is little traffic on the roads and often the flashing lights turn green quickly. The journey continues through the Prättigau to Landquart and on via Sargans to Lake Walen. Normally I cycle over the Kerenzerberg, but the cycle route along the lake is faster. Unfortunately, it is a gravel path. Fortunately, without a breakdown I continue towards Zurich, cheered on by fans at the roadside. My support crew regularly hands me the bidons and gels and provides me with an uninterrupted supply of energy. Green phases help me through the city of Zurich and I only have to stop a few times. I reach Aargau earlier than expected and I am happy that I have already completed more than half of the route by midnight. Additionally, I start eating some bouillon and boiled potatoes. Along the southern foot of the Jura I try to keep the pace, even if there is a slight headwind in between. Biel is easily passable at night, in Neuchâtel the construction site is gone and a fast asphalt is already built in. Many thanks! I get additional motivation from bicycle enthusiasts who cheer me on in the middle of the night (in French). After Yverdon the route becomes hilly, that is why it needs additional watts now. Cycling at night in dark surroundings and through deserted villages is a special experience. Highly recommended with suitable lighting and light vest! And already I am on the sea road towards Geneva and it starts to get brighter. But after 450 good kilometres I notice a certain fatigue. I take an extra portion of caffeine and some Coca Cola to quickly cope with the slight ascents of the route. In Geneva I lose some time because of the flashing lights. I am now on my last climb out of the city in the fog in direction to the border station Chancy. Shortly after 7 o’clock I reach the finish line and together with my crew I am happy about the time with about 14 h and a 36 km/h average. A great experience with perfect conditions. According to the motto “Never lose the joy of cycling”. For the average 236 watts during the ride I drank about 10 liters (WinForce Carbo Basic), ate 30 gels (WinForce Ultra Energy Complex) and burned about 11’000 calories.

A big thank you to my family and my coaches Peter, Karl, Patrik, Didi, Werni and the WUCA-Official Edgar.