Congratulations to Gerardo Rojano Galván for setting the new point-to-point record from México City to Acapulco Guerrero in the Male, 18-49 Standard Category 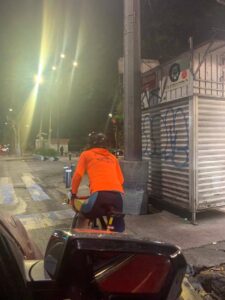 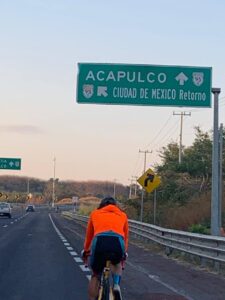 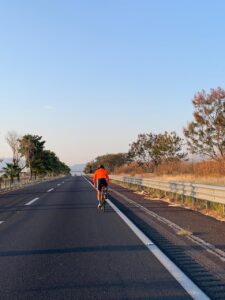 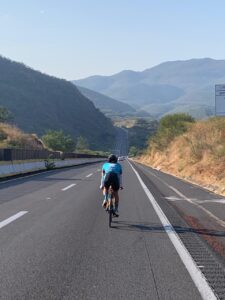 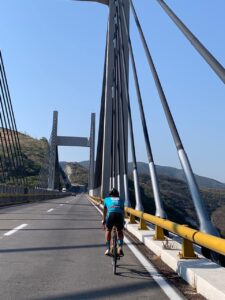 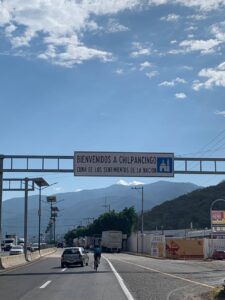 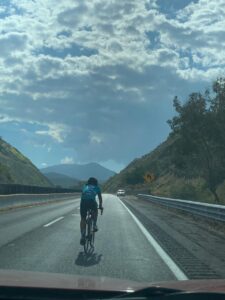 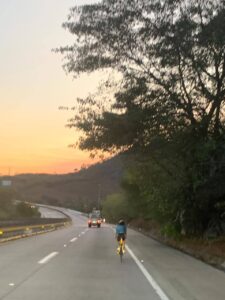 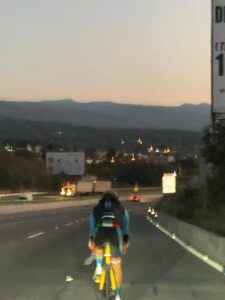 Start Location and Description: Torres de Satélite. The Torres de Satélite (“Satellite Towers”) are a group of sculptures located in the Ciudad Satélite district of Naucalpan, Mexico State, Mexico outside of Mexico City.[1] One of the country’s first urban sculptures of great dimensions. There are five towers between 52 mts and 30 mts. Coordenates: 19°29′57″N 99°14′13″O

Finish Location and Description: 0Km Highway 200D. The beginning of highway 200D is marked by the intersection with Boulevard de las Naciones and a Secretaría de Protección y Vialidad Office. For more reference, at the other side of the street is the entrance of the first luxury hotel at Acapulco Diamante; Vidanta.

We started at 2:57 am at the Torres de Satélite in front of a gas station. The weather wasn’t as cold as cold as it should have been but the coldest part of the night was yet to come. The first 15k were simple and took us through the city all the way to the first toll that leads out the city.

That toll marks the beginning of the first climb, 28Km in total. By the time we got to the top the sun was starting to rise but at 2800 mts above see level the sun is just an ornament at the horizon. The thermometer marked 3°C. The descent goes for 70K; for the first 20K you have very pronounced slopes with easy curves then the route stretches for 50K between 1% – 2% ramps and plain terrain in very long straight roads.

Around 10am we got to our first planned stop just outside Cuernavaca. At the front of a very famous restaurant called “4 Vientos” (4 Winds) which is a usual stop for cyclist that go different routes. By that time the weather was warm, 22°C and rising. I took off my jacket and longs sleeves and decided that when the temperature raised to 27°C we would start with ice packs on the back. From there we covered a 60K roller section that ends in a toll that marks the beginning of the second climb.

By that time you get there the weather is 27°C and you covered 200Km, ahead of you is the 80K climb with an average of 3%, which is the real heart of the route. It took me a little bit more of 4 hours to get to the top, many many isotonic beverage bottles, a mix of food but most of all a lot of patience and mental strength.

At the top of the mountain is Chilpancingo, a big town with heavy traffic and despite the fact that is all downhill and straight the trucks make it a very stressing and slow descent. It took me an hour to clear that section.

The most rewarding and curious experience in this ride happened at the 300km mark. For me this was my first ultra-experience, so my distance reference come from triathlon distance, the longest Tour de France Stage and the 5 spring classics finishing with the Milan – San Remo that covers 300Km. So I set intermediate goals with those distances to keep me motivated. At 300Km there was a road reparation and my support vehicle got stuck there, but as I left them behind and continued through the empty road I thought, “what´s out there after 300K?” and I answered myself, “nothing.” It came to my mind the idea of going out space and that each planet had been a known distance, Paris – Roubaix or the Ronde or the World Championship but after Milan – San Remo or Pluto or 300Km there was nothing else; no support vehicle, no cars or traffic and even the landscape turned amazingly empty… I hope I can pass to you the feeling of the moment with this words.

After that I got to 340Km – 380Km section. Between the sunset, the tiredness but the will to finish I experimented a sensation between fiscal equilibrium and mental desperation. The finish line was so close in Km but so far in time and that became the most persistent thought in my head. Eventually I overcame the thought and find motivation or at least a certain degree of concentration to cover those 40K.

Finally we got to the last toll and the last 22km. Easy going rollers, with the hotel lights shining at the end of the road.

On the last Km I rethought about the reasons why someone goes through something like this. Well, yes, it nice to have a great story to tell at a party but for me the reason was to set an example; not so much for sports but for riding safely. In Mexico we have a high rate of cyclists killed by cars; a lot of the times is because the drivers don’t respect/care about the cyclist but, I would say 50% of the time the cyclist do not obey the law, the ride against the traffic or in between cars and that is not the way to do it. My purpose with this ride was to show that cars and bikes can ride on the same roads as long as we all respect the law. That is why I took special care on making an emphasis on the paperwork I had to do with the proper authorities and permits I had to get or the signals that the car should had. Fortunately the authorities helped me and the record attempt had some modest but significant impact with the people close to me and we manage to bring enough publicity to make it viral and the message reach a lot of people. So next year Ill try other routes to keep showing people that this sport is safe and that every cyclist matter cuz you never know if that cyclist is going for a World Record!!!