NOTE: Gerry owns so many records that sometimes he breaks his own records just for something to do! 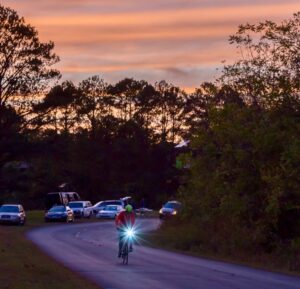 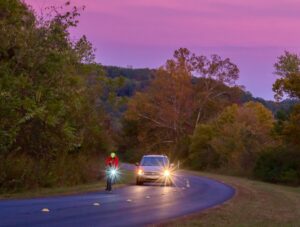 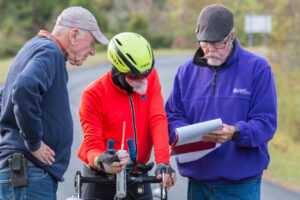 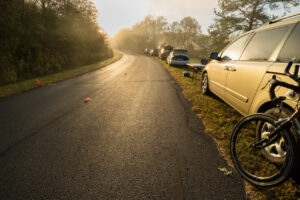 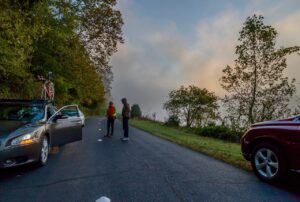 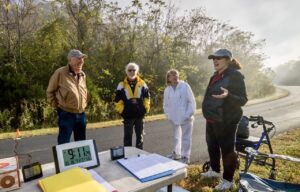 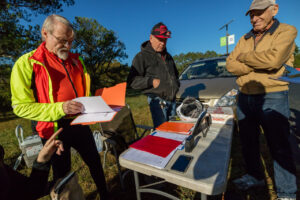 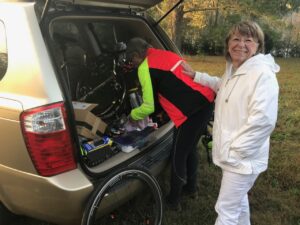 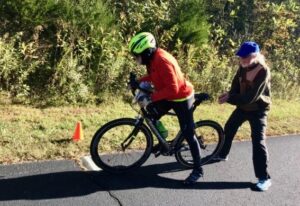 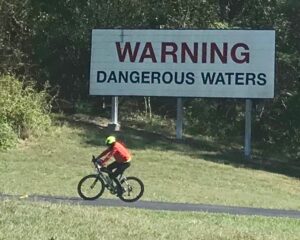 Note to reader: I’ve yet to recheck my arithmetic for total number of records, but I believe these are the correct figures.  And yes, some of these records were set in some of our smallest states, but some also in larger states and like Alaska, Florida, and smaller but still challenging nations like New Zealand and Israel (crossing Armageddon in 100+ deg F temperatures!).

About ten time and distance trial record attempts were begun concurrently, but multiple slow-downs and stops due to leg cramps, a minor crash, and significant drop in average speed after about 250 Km jeopardized the 6-Hour and 200 Km record attempts and made it unlikely that the records for the 300 Km and longer time trials would be broken.  The chief official recommended packing it in after about 165 miles and I complied.

Conditions:  Sunny and cool  (with highs in the low 80s F in the day; unpleasantly cool (low of ~ 50 F) in the night. Mostly light winds, but bike speed varied by about 4 mph depending on direction relative to the wind.  Unfortunately I was still thoroughly acclimated to hot conditions, e.g., 90 – 100 F and dressed for the quite cool temperatures prevailing when I started mid-morning.  Later I became uncomfortably warm but I was afraid to stop to shed clothing because if I were to break the 6-Hr and 200Km records, I could not afford to lose even a minute.

The asphalt road was in fairly good condition, but hundreds of small expansion cracks and a couple of small pot holes and bumbs produced a modest but eventually tiring washboard effect that became increasingly irritating as the miles piled up. A couple weeks before the record attempts, I actually spent half a day trying to patch some of the bigger cracks with asphalt patching compound.

Why attempt these records?  I had planned to attempt to break at least one record in the 70+ age division June 7, 2019 in honor of my beloved father who was my biggest fan and sometime crewman, and had recently entered hospice care. But life, and sometimes death, often have other plans.  My father passed away in quiet grace early that day, June 7, D-Day +1 hour, perhaps not so inappropriate for a veteran of WWII.  I was blessed to be by his side when he died.

I was all too aware that at my age, my times and distances were likely to be much slower and shorter than some of the younger elite cyclists were capable of.  Nevertheless, I was stunned at just how much my performances since turning 69 on, would suffer from old age, interrupted and inadequate training due to multiple family illnesses, injuries, and hospitalizations.

Another reason: extending myself further and further to see what I can do with the opportunities and admittedly limited talent God seems to have given me after I believed, only 13 years ago, to be all washed-up as an athlete after a devastating knee injury.  I’ll certainly never be in the same league as a Penseyres, Haldeman, Hogan, Robic, or Strasser, or one of any number of other outstanding ultracyclists, but I’m nevertheless amazed at how far a fairly ordinary and aging athlete can manage to push himself on a bike.

And yet another reason: demonstrating to the public what even older folks can accomplish on what is perhaps the most efficient machine for transportation ever invented – the bicycle.  Most people who inquire about what in the world I’m doing are surprised, if not sometimes downright flabbergasted, to learn not only that I’m riding hundreds of miles in a single day, but that I’m often as old or even much older than they.  Just maybe some of them will be encouraged to get off the couch, out of the house, out of the car, and see the world from a bike.

And quite frankly, a chance to add to my list of successful record attempts – 118 confirmed WUCA records (one of which was actually a tie), most of them open-class – 121 if one counts my speed-hiking records along the 70+ mile length of the Great Smoky Mountains National Park and a Tennessee Senior Olympics 20-km cycling record (imagine that — an ultracyclist winning and setting a record in a 12-mile race!).  For some time I had been saying that maybe I’ll go for an even hundred if I live long enough, and I was dead serious about that latter condition –  “if I live long enough.”  But no longer!  Pending certification by the WUCA, these two old-guy performances should yield a total of 120 WUCA /UMCA records in my 13-year career.  By no stretch of my imagination did I consider this, or my 2010 World Cup Championship, a possibility when I first tested myself at a WUCA /UMCA record attempt across my home state of Tennessee more than 13 years ago.

Equipment:  Titanium Litespeed Teramo, HED 5.5 aero wheels with latex tubes, my outstanding Rivet Cycle Works Independence saddle, Syntace aerobars, SpeedPlay pedals, Cane Creek bar-end shifters, and Shimano Ultegra transmission.  This bike, manufactured in Ooltewah, TN about 80 miles down the road from my home, has been my mount of choice for 114 of my 118 WUCA/UMCA records and two pending records, and most of the races leading to my only overall UltraMarathon World Cup championship in 2010 and my 2015, 2016, and 2017 World Cup Six-Hour Challenge championships.  It was my first modern road bike.  I doubt there is any other single bike in the world ridden for so many records and championships (because I can’t afford a new bike every 3 months or so like the pros!).

Best Part:  (1) The expert support and officiating of my wonderful team of officials and crew (inverse alphabetical order): Brent Williams, Robert Sanders, Harvey Liberman, Nick Lavrik, Virginia Harrow, Glen Hagerman, Mikki Eddlemon, Tony Curtis, Mark Cristy, Rhonda Bostik, and last but not least, Steve Birger.  Also much appreciated, expert mechanic Brent’s prepping of my bike in the days leading up to the ride, and the amazingly effective treatment of leg cramps by Brent’s wife, Physical Therapist extraordinaire, marathoner and triathlete, Dr. Jeannie Williams.  Jeannie drove miles from her home on short notice, set up a PT table  and in short order almost magically made those cramps disappear for the rest of the ride!

Unusual Happenings:  My initial strategy was to pace myself for the longer record attempts from 300Km and longer because I believed based on past experience and just plain old common sense that riding faster for the shorter records ranging from 100Km through 200Km would leave me sorely wanting in the ability to continue on for the longer records in record-breaking time.  While riding unsupported in practice during the past summer, I had matched or broken the 100-Km record a couple times, so it was difficult to deliberately keep my speed at a reasonable pace even though I was pretty sure riding much faster would make the longer records unattainable.  Nevertheless, I gave in to the temptation to go for the relatively short 6-Hour and 200-Km records despite painful leg cramps that caused a few stoppages and many soft-pedaling slow-downs to try to work out the cramps.  Despite the cramps and resulting stops and slow-downs during both the 6-Hour and the 200-Km, with the encouragement of my team and by ramping up the pace for the last few miles, and an almost miraculous cessation of cramps during those last miles, I managed to break the old records by a very few minutes.  Unfortunately, I paid the price as I continued on for the longer record attempts.

An embarrassing and a bit painful slow-speed crash while making a sharp turn on a slope after a stop to work out cramps – no adverse effects other than a sore knee, a flat front tire, a rear wheel completely falling off (no idea how that happened!), and of course a loss of time.  The turn-around at the east end of the course is so tight (i.e., short radius) that several times I felt the wheels slipping laterally outward and was fortunate not to go down.  I literally had to slow down to 7- 9 mph to safely make the west-end turn every 2.2 miles, and slow down to about 13 – 14 mph to make the turn at the east end.

Acknowledgements: My sincere, heart-felt thanks to WUCA Officials (in alphabetical order) Steve Birger, Tony Curtis, Virginia Adams Harrow, Nick Lavrik, Robert Sanders, Brent Williams, and crew women Rhonda Bostik (a former masters world cycling champion in the pursuit event) and Mikki Eddlemon (former World Senior Games champion in several running events and acrobat extraordinaire), and crewmen Mark Cristy (marathoner and crewman or official for my World Cup championship and many records), Glen Hagerman, and Harvey Liberman for their professional but friendly help in this crossing attempt. Without outstanding folks like these, I would never have been able to attempt my very first record crossing of Tennessee some 13 years ago, nor any of the 119 successful records since.

And special thanks is due outstanding sports physical therapist Dr. Jeanne Williams for chasing away my ride-stopping muscle cramps.

And a heart-felt thank you to Deborah the Head Rivetress at The Rivet Cycle Works for use of her outstanding saddles. It’s a real blessing to ride 100 miles and more without constantly dwelling on the discomfort and sometimes excruciating pain in one’s nether regions from a poorly designed or ill-fitting saddle.

I would also like to acknowledge the past years of officiating and crewing  by my dear friends Bill and Betty Williams for many of my records attempts.  They both would have once more been on our team for these attempts if it were not for Bill’s courageous and continuing fight with cancer, and Betty’s constant, loving care of Bill. I’m really looking forward to their return to my team!

And finally, as good King Harry V stated (at least as one Will Shakespeare has it) on learning that  he and his little band of brothers had, almost miraculously, won the Battle of Agincourt against all odds – “I thank God, and not my own strength for it.”

Dedication:  I dedicate these record attempts to my wonderful and loving father Joseph Eddlemon, Col. USMC retired, husband, father, grandfather, great grandfather, veteran of WWII’s Pacific Theater, businessman, supporter of the arts, and consummate story-teller, who passed away June 7,  2019 at the age of 93. He is sorely missed by his family and friends, and will never be forgotten.

Different points along the certified course of 2.19940 miles depending on the specific event.  Distances and times determined by UMCA’s proration methodologies.