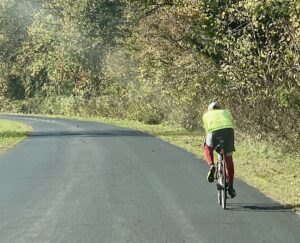 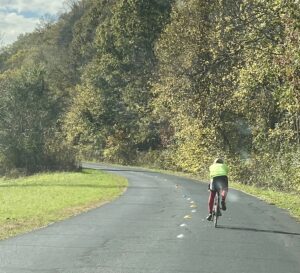 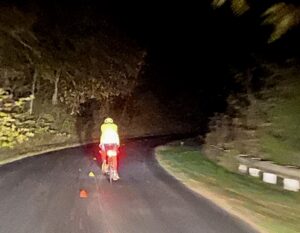 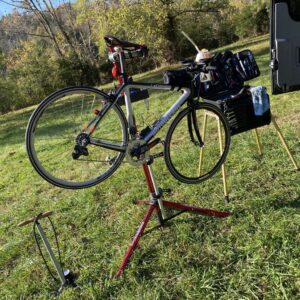 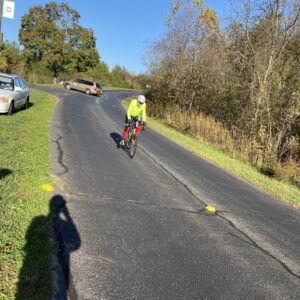 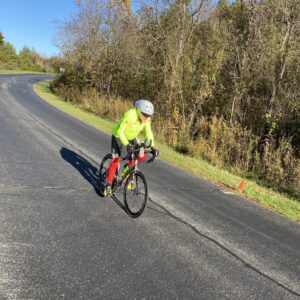 122th through 126th WUCA/UMCA Records!
Note to reader: I’ve yet to recheck my arithmetic for total number of records, but I believe these are the correct figures. And yes, some of these records were set in some of our smallest states, others in some of our larger states, e.g., Alaska and Florida, and in the One-Week Time Trial (HWMR). If we throw out the short ways across the smallest states or provinces (DL, RI, Prince Edward Island), that leaves 118 records.

Five time and distance trial record attempts were made concurrently:

About 30 meters east of intersection of ~1.1 mile long Lock Access road for Melton Hill Dam and boat launch driveway just east off US Hwy 95, near Oak Ridge, TN. Actual length of one WUCA/USTAF-certified lap = 2.19940 miles. Because it’s impossible to follow the shortest measured course around the sharp turns at either end of the track, actual distance ridden is approximately 0.7 – 0.8 miles longer per 100 miles (i.e., 0.7 – 0.8% longer).

Conditions: Sunny, light winds, mid-forties degrees F at start. Mostly light winds with some moderate gusts. Billions of gnats and other insects in the evening could have made riding most unpleasant – the entire track is adjacent to the Clinch River, but I had learned the hard way from training at the site to wear an improvised mask of very fine nylon mesh (O.K., O.K., so it was a section from one thigh of “Queen-size” panty hose purchased specifically for this ride – someone wanna make something of it? ;-). Unfortunately, this time I didn’t want to take the time to stop, put on the bug netting, and restart, so I ate more bugs than I really cared to.

The asphalt road surface is not the smoothest, but I obviously considered it acceptable, especially for hilly East Tennessee. The principal advantage was it’s flatness (~ 5-8 ft/mile), but the extremely tight turns at either end meant slowing down from 16 – 19 mph to only 5 – 6 mph at one end and down to 12- 13 mph at the other end every single lap (about every 1.1 miles). Resulted in much wasted energy.

Why attempt these records?

I was all too aware that at 75 years of age, my times and distances were likely to be much slower and shorter than even four or five years earlier and certainly shorter than some of the younger elite cyclists were capable of. In the event, I was stunned at just how my performances would suffer from old age, and interrupted and inadequate training due to multiple family illnesses, injuries, and hospitalizations.

One big advantage of using the improvised track at Melton Hill Dam in East Tennessee, was its proximity – only 18 miles from my home. I figured that would make recruiting a team of officials and crew much easier, but nevertheless it proved a big challenge when I was surprised to learn how few cyclists would rather watch an old guy go for records when they could just enjoy riding themselves.

Another reason: extending myself further and further to see what I can do with the opportunities and admittedly limited talent God seems to have given me after I believed, only 14 years or so ago, to be all washed-up as an athlete after a devastating knee injury. I’ll certainly never be in the same league as a Penseyres, Haldeman, Hogan, Hopkinson, Baloh, or Strasser, or one of any number of other outstanding ultracyclists, but I’m nevertheless amazed at how far a fairly ordinary and aging athlete can manage to push himself on a bike.

And quite frankly, a chance to add to my list of successful record attempts – 121 confirmed WUCA/UMCA records (one of which was actually a tie), most of them open-class – 125 if one counts my speed-hiking records in the Great Smoky Mountains National Park and a Tennessee Senior Olympics 20-km cycling record (imagine that — an ultracyclist winning and setting a record in a 12-mile race!). For some time I had been saying that maybe I’ll go for an even hundred if I live long enough, and I was dead serious about that latter condition – “if I live long enough.” But no longer! Pending certification by the WUCA, these five attempts should yield a total of 126 WUCA records in my 14-year ultracycling career. By no stretch of the imagination did I consider this a possibility when I first tested myself at a WUCA record attempt across my home state of Tennessee some 14 years ago.

Equipment: Titanium Litespeed Teramo, a Brooks B-17 saddle, Syntace aerobars, SpeedPlay pedals, Cane Creek bar-end shifters, and Shimano Ultegra transmission. This bike, manufactured in Ooltewah, TN about 80 miles down the road from my home, has been my mount of choice for 110 of my 114 WUCA records and four pending WUCA records, and most of the races leading to my only overall UltraMarathon World Cup championship in 2010 and my 2015, 2016, 2017, and 2019 World UltraCycling Association Six-Hour Challenge championships. It was my first modern road bike. I doubt there is any other single bike in the world ridden for so many records and championships. I also rode my Motobecane Le Champion road bike for about one third of the total miles for a slight change of geometry and saddle (Selle Anatomica).

Hardest Part: Preparations for the record attempts including fitting in training, logistics, and achieving a critical mass of crew and officials under trying circumstances. So much time spent trying to recruit crew and officials in such a short time left me with little time to do my own personal preparations, including training and tapering. I ended up with almost exactly 2 hours and 20 minutes of sleep the night before the start. An unpleasant aspect of cycling along a river is the presence of billions of swarming gnats or midges (probably the truly remarkable phantom midge Chaoborus punctipennis). They’er non-biters, but in the evening they are most difficult to keep out of eyes, nose, and mouth.

Unusual Happenings: Near perfect weather for the attempts! I seem to have a knack for picking lousy conditions for record attempts so this was a most welcome change.

Acknowledgements: My sincere thanks to WUCA Officials Mark Cristy, Steven Morris, Robert Sanders, Betty Williams, Brent Williams, and crewmen Mikki Eddlemon and Merritt Williams for their professional but friendly help in these record attempts. Without outstanding enthusiasts like these, I would never have been able to attempt my very first record crossing of Tennessee some 14 years ago, nor any of the 126 records since.

I should give special mention to wife Mikki Eddlemon, and old friend and track teammate, Mark Cristy, who together have served as crew or official for over half of my more than 120 WUCA/UMCA record rides and many races including several world, national, and regional championship wins. Bill and Betty Williams, Robert Sanders and Tony Curtis have also served for dozens of record attempts over the years.

And finally, as good King Harry V stated (at least as Shakespeare has it) on learning that he and his little band of brothers had, almost miraculously, won the Battle of Agincourt against overwhelming odds – “I thank God, and not my own strength for it.”

Dedication: I dedicate these record attempts to my wonderful and much loved Mother, Germaine, and Father, Col. Joe Eddlemon, USMC, and team member Bill Williams. All three passed away in the past year.

The finish points and times were determined by proration; thus they occurred at various points along the 2.19940-mile track. Times and distances are presented in the following table.