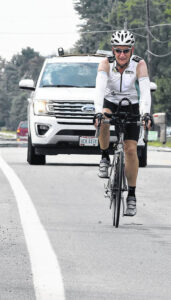 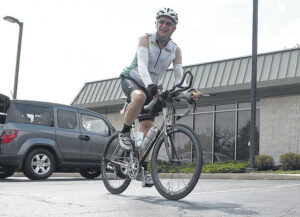 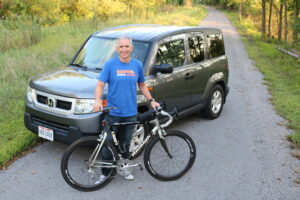 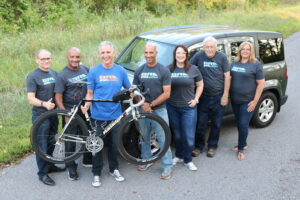 Conditions were good but humid, temperatures reached upper 80’s in the afternoon and high 60’s low 70’s at the start.   We had a WSW wind and in the afternoon reached 10-12 MPH.   Experienced some difficult cross winds in the late afternoon, strong enough that a passing truck knocked off the amber lights from the follow vehicle.  Fortunately the lights were only scratched and battle beaten but still in good operation to continue the attempt.

We left the hotel at 3:45a and started at approximately 4:00a to get a jump on Cincinnati commuter traffic and rode 3 hours in the dark hours of the morning.  Traffic was light through Cincinnati and Dayton area considering the time of day.   The first 50 miles were rolling hills and we climbed 2900 feet.

Starting at mile 50 the rolling hills flatten out and we enjoyed favorable road conditions with very few miles of chip seal.  The last 25 miles we experienced the highest level of vehicle and truck traffic but this was very manageable with little safety concern.

Our only time challenge were two railroad trains,   the first we needed to find a re-route quickly in Cincinnati and it was stopped dead cold on the track.   The 2nd was a passing train near the Bowling Green area and we needed to wait 5-7 minutes.  We used this opportunity to “refuel“to avoid a later stop.

I have had my eye on an attempt for several years.  Finally was in a good position to train and focus on this event.  Also, partnered with a nonprofit organization called “Resurrecting Lives Foundation” that focuses on supporting our veterans who still have medical combat conditions after returning home from serving our country.  This event raised $3000 for our veterans.

We arrived safely with little concerns, the crew was very excited and helpful plus with the Wahoo GPS our friends and family could follow our progress.   With the event also being a fund raiser we had 2 TV stations and several newspapers on the course interviewing and reporting on our progress.   It was nice to see this as support for our veterans who continue to struggle with their war injuries.

The stopped train issue just 3 miles into the start of the event.  It was a bit of a downer but we pulled together and made the best of it.

The cross winds during the last 30 miles could have been a disaster (with the lights falling off) but we pulled through and was able to overcome the situation.  Afterword’s we were able to have a good laugh as duct tape saved the day!

Also, semi-trucks were rocking me pretty good (in the cross wind) when they passed but I was able to develop a technique to reduce the issue and stay safe.