Congratulations to Craig Nillson for annihilating all current records in the following category: Male (18-49), Standard Bike in the England W-E, E-W, and W-E-W directions

Here are the records he broke:

I guess next he needs to conquer the N-S, S-N and N-S-N records! 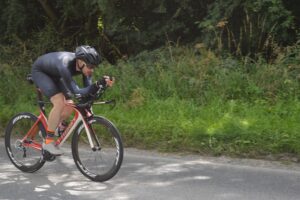 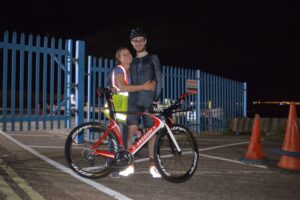 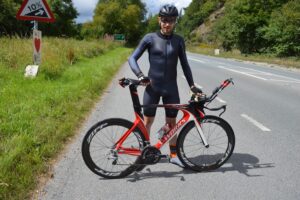 I started my England Cross Country, W-E, E-W and W-E-W attempts at 10:01 on the 1st of August from the side of the road just west of the junction between the B4594 and A44. I set off steadily aware that the first part of my route was to be the hilliest portion of the ride. Despite that I made good time through the rural A-roads until I reached Worcester, bumping into a cyclist on the way who cheered me on along the route. Reaching the city had an immediate effect on my average speed and all I could do was watch my average tick down. As I came out the other side of the city. I tried to keep my calm and settle back into my rhythm until what I forecast would be Northampton, but Warwick and Leamington Spa also hampered my progress. Even with the towns in the way, I managed to steadily gain time on my schedule. Passing through Northampton made resupply very tricky thanks to the combination of very large and very busy roads through the city and I got lucky at one traffic light as Liana could pass me a bottle and some food.

Passing out of Northampton rapidly became rural and hilly, and I took a couple of wrong turns as the roads got bigger again. I had been told that Cambridgeshire and East Anglia were both extraordinarily flat and so I looked forward to my average speed increasing as I homed in on Lowestoft. As I reached Cambridge I was cruising along but I had an unpleasant surprise as I discovered that roadworks on the A14 meant a temporary prohibition on cycling forcing me to re-route through the centre of Cambridge on the fly. I managed to lose the road I was following and had to rely on my phone to verbally navigate me back on track after I realised. Up until this detour I was flying and well up on my schedule. Fortunately, even with my tour of Cambridge I didn’t lose too much time and I was soon back on the A14 flying east. I raced to get off the busy A14 before sunset while my follow car stopped to refuel for the night leg. Luckily, I got off the busy road onto quieter ones as they caught me back up around 15 minutes before sunset. Riding at night was much easier with the headlights of the follow car behind me, especially given I couldn’t ride with my lights on a high setting to preserve battery. As I zeroed in on Lowestoft I found it odd that there were no signs for the town, and I started getting increasingly edgy as I got closer and closer to the distance I had forecast for the ride, finally the first sign admitting to Lowestoft shone back at me. By the time I reached Lowestoft the town was almost empty, I flew through the town and reached the harbour just under 3 hours faster than the previous time at 22:48. In the final kilometres of the ride I had set my sights on first of all sub-13hrs and then later sub 12:44 to give the time difference a nice round number but I couldn’t quite make it. If only it hadn’t been for the re-route through Cambridge!

I didn’t stop for long in Lowestoft; just long enough to pose for a photo; celebrate briefly and woof down a pasta salad. I started getting quite cold standing there in the sea breeze, I quickly threw on a thermal and took my position on the new start line. In barely 30 mins I was underway again heading out of Lowestoft. I tried to take a shortcut by backtracking my way in, rather than the planned way back out of the town, but things quickly went awry and I ended up taking a convoluted route out; probably costing me all the time and distance I saved. Back on the main road I tried to settle in on my TT bike and pick up where I left off, but something just wasn’t right; the speed just wasn’t the same, and before long I realised that not only was I facing a stiff headwind but I was also grinding against a steady incline. The grind continued all the way through the darkness to Cambridge. It was a lonely few hours, with just the rumble of the support car and the surprised rabbits for company. Arriving at Cambridge in the small hours I found my parents waiting to transfer follow car; a whirlwind of activity to transfer kit, spare bike, lights and signs to the new car while I ate ensued, in no time we were ready to set off towards dawn. I had just about maintained my planned pace to Cambridge, but the next few hours became increasingly slow going as the road got more and more uphill, with downhills almost forgotten; even the flat sections were hard going thanks to the headwind. As time wore on, had I been told that Northampton was on the top of a mountain I would have believed them, the road rose and rose all the way to the city and then I had the urban streets to negotiate in the middle of the day once again. By this point I knew I was well off the planned pace with the steepest sections still to come; for the first time I fell behind my planned pace as the hills and wind continued. Into the final miles I was counting the minutes as I climbed hill after hill regretting the gearing on my time trial bike as the gradients kicked into double figures. My low speed meant that drivers became increasingly irate at my follow car, a number steering aggressively to be able to buzz me despite the distance they had to cover having gone around the car. Fortunately, by this point I was so focussed on finishing they would have struggled to phase me, short of actually making contact with me as I counted down the kilometres. Finally I hit 10km to go and the worst of the hills seemed to be behind me, I creaked down into my full TT position and stuck everything I still had into finishing; as my follow car overtook me to get into position to see me finish all the miles fell away and I was flying and it could have been the finish of a 10TT as everything screamed at me as I lunged for the line, stopping the clock at just over 28 hours after starting. I turned and rolled to a stop, even throwing my leg over the saddle seeming like tackling the entire ride again. It had been a tough 28 hours, but I had made it, all that remained was the celebrating. And sleeping.