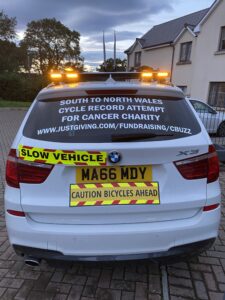 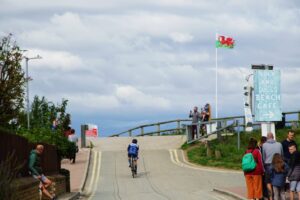 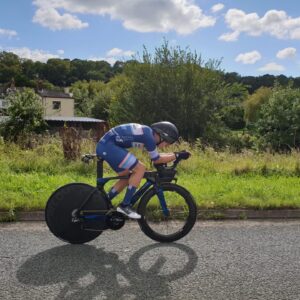 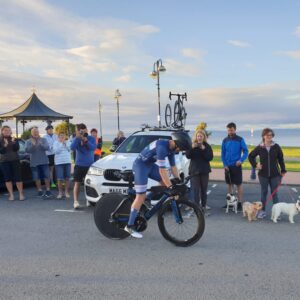 The start was the roundabout at the entrance to Barry Island Carpark on Friars Road, Barry

Conditions on the morning of the 29th were calm and clear with a moderate Northerly wind. Temperature were cool for the summer months in the UK with an average temperature on the day of 13 degrees. The planned original start time of 7:00 on Friday 28th had to be postponed by 24hrs due to ‘storm Francis’ leaving poor weather conditions across much of the UK. The terrain through South and Mid Wales was mostly rolling with some notable climbs around 30km and 120km. Both climbs lasted for about 30km each. Road surface was largely smooth until I hit the Northern parts of Wales where it was poor road surfaces with lots of cracks and potholes.

Due to the 2020 race schedule being decimated due to Covid and the recent death of a family member, I wanted to do something that would challenge myself both mentally and physically. Racing can often be an insular and selfish sport and this challenge gave me a perfect opportunity to give back and raise money for a worthy cause. I liaised with a local charity who dedicate their lives to caring for cancer patients and invest heavily into the research of colorectal cancer. This event raised over £6500 so far which is an amazing achievement by everyone involved.

I took two bikes with me for the trip and spare wheels. One bike was a road bike, a Scott Addict RC and the other bike was a Giant Trinity Advanced Pro. I chose to start with the Giant TT bike and only swap in the event of a puncture or forced change. I chose to run a solid rear disc wheel and a deep 78mm Enve 7.8 Front wheel in order to give myself the most aerodynamic advantage possible. Clothing wise I was wearing a custom NoPinz race suit designed in the colours of the charity and with some sponsors on who have helped me out for the challenge. Other areas where I invested heavily was helmet and bike components which had all been selected to give me speed advantages.

I used mainly liquid fuel, with only 2 bars of Cliff Bar solid food along the way. Throughout the 8:57min I consumed 6 x 500ml of SIS BETA fuel which contains 321 calories per serving. This is a strategy that has worked for me in previous races and I wanted to stick with it this time.

The best part, despite finishing the ride in under 9hrs was the donations we received from strangers passing by on the way up. The follow car was dressed in all the necessary safety lights, signs and stickers but we also put the charity sponsor link on there which helped us raise the profile of the charity. The support from family and friends at the start was humbling and really helped me push through the dark patches later in the ride.

The wind was the worst part of the journey, in particularly around the mid Wales. My post ride statistics show that I had a headwind for 97% of the journey, 8:28min with only 15:50 of tailwind. Despite the wind the weather was dry and mild.

My thorough preparation ensured that I had 4 sets of wheels on the roof in case of a puncture. What I didn’t envisage was the follow vehicle getting a puncture which resulted in a slow puncture as the ride went on which had to be rectified on the way back from North Wales.

I arrived at the entrance to Talacre Beach Car Park in Talacre, North Wales