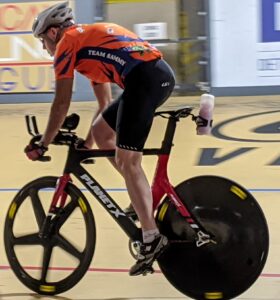 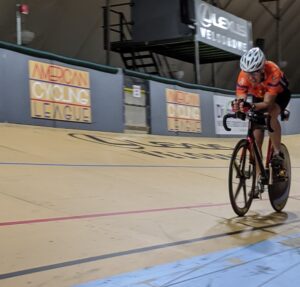 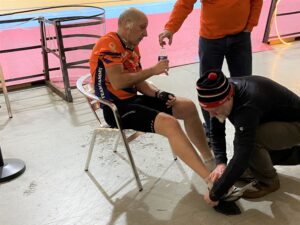 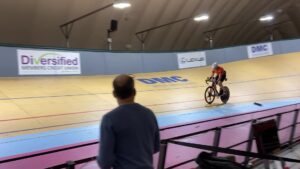 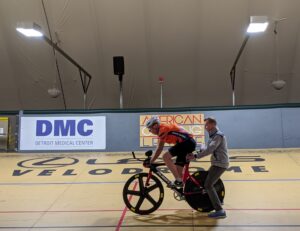 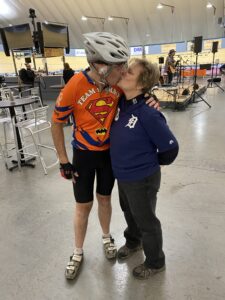 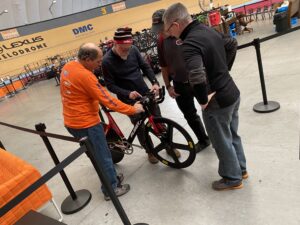 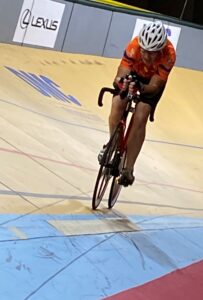 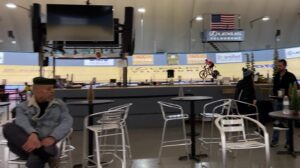 Congratulations to Bill Windhorst for setting the men’s 60-69 Age group record for the 100Km Indoor Track on an upright bike with a time of 2:55:20.05

Lexus is a 166 meter wood track.  50 degree turns & 15-20 in the straights.  “Only” 600 laps of the body battling 1 G or so, twice a lap.  Start & finish were at the pursuit line.  Choice of “vehicle” was a 56 Planet X Pro Carbon Track Frame with Mavic 5 spoke front and Rear Disc wheel set (with tubular tires) &  of course traditional fixed gear drive train.  47 T ring with 15 T cog.  Traditional road bars with Carbon Stryke aero bars.  Yep, short track, steep banks, fixed gear.  No coasting or gears for me.  Nothing like a challenge!  Similar back up bike all set up just in case.  Anything is possible.  All laps recorded using Excel spreadsheets & macros showing target finish time, average mph, cumulative speed / time & lap speeds.

Start was a “balmy” 35F outside & 62F throughout the effort, inside.  Start was almost 50F inside.  A repair man was at the track working on replacing the blower, for the furnace, at 9:30 AM.  It was 47 inside, at that time.  It wasn’t known if replacement would be found in time.  I might have been a little better off without it not working to help lower my heart rate.  (Back to that later).

Countdown to start time was started & I was on the way at 5:04 PM.  Got settled in & started clicking off lap times within 1/10th – 3/10th of a second to target lap times.  Couldn’t be going better, I thought, until about 70-80 laps.  Something was just not feeling right.  I started watching my heart rate, about 10 beats higher than normal.  Not good!  I said to myself, this is going to hurt.  By lap 200, times were inconsistent.  By 300 laps, laps were ½ – ¾ of a second high.  Put it in survival mode.  I tried to exhale, a lot to help lower my heart rate because it was now about 15 beats higher.  By 2 hours, heart rates were where they normally ended for these lengths of training rides.  Reading my Garmin today, data shows they were sometimes actually 5-10 higher (2 hrs. in) than normal.  Said to myself now, this is “really” going to hurt.  I was right, about 15 minutes later, some cramps were starting.   Last 30-35 minutes or so cramps were hitting on a regular basis, in 2 or 3 parts of the upper legs.

“Fuel” of choice is Accelerade every 10 minutes & a small 6 oz. bottle of Ensure.  Couple ozs., every half hour.  Endurolyte capsules before the start, at the start, & 2 per hour during.  Bottle handoffs were at 1 & 2 hours.  With high heart rates, from the beginning, these “fuels” only helped from getting cramps that might have locked up a leg which could have launched me over the bars because of the direct drive single speed gearing.  Not preferred so started going high in the banked turns & letting them bring me down faster without having to use as much leg muscle.  Little longer, beats launching option.

None of the training for this or getting me back (similar) to where I used to be ever produced cramps.  It went great and much better times.  Haven’t had cramps like this since some of my previous 24 hour training, several years ago.   Good training doesn’t always equal a good day event.  My bad day started early morning with symptoms of a lower internal infection I had several months ago.  Leftover antibiotics helped shoot that down but heart rate was already up & never knew it until 10 minutes in.  Just shows heart rate trumps good training, power wattage, LAT, VO2 Max, fuels you use.  It controls them all and will shut you down.

So although I didn’t hit target speeds or times I set, based on training, I got my ability to push through pain back.  Also coming out of this was being able to raise $500 for Make-A-Wish of Michigan and the track’s Jr. Program.

This was accomplished, only due to the officials & crew support & all the fans that came to watch somebody go in circles & yelling things like “Stay In It”.  That stood out.  So a direct thanks to my officials, Chris, Kevin & Herb.  Much rather cramp than click a button 600 times.  The official Crew of Mark H, Mark A, Glenn, Phil & Tom especially helping me off the bike.

Yes, all crew, officials & fans helped but the special & biggest thanks goes to my Crew Chief & wife Julie who over 35 years of marriage has put up with several of these types of efforts, including several 12 & 24 hour ones & sat in the rain on the back of our tandem for several thousand miles.  Good weather days of course too.

So training starts back up, by the end of January (I think) since my suffering ability is back.  I’ve missed it.  I did the 100k because it was short enough to get back into it and not a huge amount of training.  Need longer & or set this bar higher.